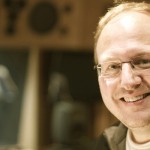 Nebraska, To Russia with Love, BearCity, The Dark Ages

I’m a film and TV scoring guy, but I’m also a modern classical composer. My background is in classical music: I did my degree in piano performance but my intention was always to take that training and put it to use as a film composer. The scores I grew up with were the iconic ones by John Williams and Jerry Goldsmith and Ennio Morricone, and what I loved about them was that their music sounded classical-ish, but it was more melodic, more accessible, and more focused emotionally.

Last year was the realization of a dream, when I recorded my album “The Architect” in the hall at AIR Studios in London with the Chamber Orchestra of London. This was something I had wanted to do for ages: leave the samples and production tricks aside and write some music for a real string orchestra and piano.

And as a fun side project, back in 2009 I started writing under the name The Candlepark Stars. It’s a totally completely different style – I’d call it cinematic post-rock – but it’s a really great way to give my brain a break from orchestral writing.

What is your niche or specialty, that makes you stand out from rest of the audio professionals?

I’m drawn to scores that use a classical vocabulary: piano, strings, brass, percussion – and that’s the kind of thing I really love to write. My strength is definitely orchestral writing but I also really love hybrid scores that mix electronic and synth elements with acoustic and orchestral instruments and I’m doing so much more of that lately. You get a real emotional gut-punch when you add a single acoustic or traditional instrument into an electronic piece of music. I love the effect that that has.

I’m a Logic guy so that’s my main DAW. I’m running my studio off of a 2009 dual quad-core Mac Pro, and I have a couple Mac slaves connected to the main machine via Vienna Ensemble Pro. That DAW outputs to another Mac that’s running ProTools, which runs in the background and captures stems for me. Everything runs through a couple MOTU 828mk3’s, and my monitors are Dynaudio BM15a’s. My orchestral template is around 450 tracks spread across 3 Macs, and it’s set up to route everything to submixes and then to stems.

Because I do a lot of writing with orchestral samples and I’m trying to recreate the sound of a real orchestra, high-quality sample libraries and reverbs are essential for me. I think the brass ring has become Spitfire’s orchestral collection: they’ve slowly been taking over my template! I also use a lot of 8Dio, CineSamples and ProjectSAM samples. They’re each brilliant in their own way and they each have a specific kind of sound, so you go to the library that’s best at capturing a specific sound for a specific project. For synth and hybrid stuff I use Zebra a lot as well as Omnisphere. For percussion and glitchy and textural stuff, I go straight to Heavyocity. And I always have the Waves L2 Maximizer on my master output channel: it’s zero-latency and it really helps keep your music sounding balanced while you write – you’re basically mastering-as-you-go with that turned on. My default reverb is that great Lexicon Native plugin (Large Hall!) and Altiverb runs a close second, along with 2C Audio’s Aether Verb.

I used to be such a night owl, but these days I’m better at early mornings. If you get an early start it’s amazing how much you can accomplish in the quiet before 10am. Once it starts getting dark early, I’ll become more of a night owl. By January I’ll probably be back to working at 2am again!

My first thing is always this: I use the AppleTV to screen a film for the first time on my 65” plasma TV because you need a sense of how that film will look as a finished product, and seeing it on a big screen is important. The next step is figuring out the size and scale of the score relative to the picture: what kind of sound the film needs and how score will be used. Once you figure out what your palette should be you just throw your best ideas at the picture to see what works and what doesn’t. It’s also important to identify what the peak of the film is, score-wise, so you know that that’ll be the biggest/most emotional/loudest/most intense spot for score, and you can measure your efforts up to that point and after that point. Once you’ve figured out the tone for the score, you just set about to writing it!

Like so many other composers, I just see a picture and I get musical ideas for it. I’m always afraid that this latest good idea will be my last one and I’ll never be able to write something new again… but somehow the well always fills up again. I’m always listening to new and different music, which helps to clear out the brain-RAM. I love discovering new TV series and new movies – that’s great for inspiration and motivation – and I find that I do my best work when I’m in a good, happy state of mind. I’ll tell you, though, that when you have a great piece of film in front of you, the ideas usually just pour out whether or not you’re feeling particularly creative. The picture is always your best motivation and a good film can easily defeat any lack of inspiration.

I just discovered a time-stretching technique called Paulstretch and went nuts with it. It time-stretches and smudges your audio but doesn’t change its key. I just released a new Candlepark Stars album that’s time-stretched recordings, and it’s the coolest thing: I ran my original Candlepark Stars recordings through varying degrees of stretching and smudging, and the results are these really haunting pieces of music where you can still hear the original song’s DNA in there somewhere, but the final result is like a cross between “Inception” and Explosions in the Sky.

I think it’s important to understand and empathize with how scary the music process can be to a director: they’ve been working on this film for months or even years and they’ve seen it through every step of the process, and now you’re about to take it into your own hands. That’s a big responsibility. Also, before you begin any project it’s important to outline expectations on paper: what you’ll be paid, what the work will consist of, delivery dates, expectations, and – especially in low-budget projects – who will own the music and what rights the film will have for it.

Can you tell us about your latest project?

I just finished the score for a documentary film called “The Seer” by filmmaker/director Laura Dunn and EP’s Robert Redford and Terrence Malick. It’s an absolutely beautiful and moving documentary that we hope will be doing the festival circuit next year. It’s a very “less is more” kind of score that’s mostly piano and cello, but also has some electronic stuff in it. It was a challenge in the absolute best way: the film was so strong that I really had to turn my A-game into my A++-game. I feel like it brought out the best in me and also gave me a chance to write some music that I hope does justice to a picture that’s breathtakingly beautiful and honest. I’m excited for people to see it.

Never stop writing. If you’re a composer you need to always be composing even if it’s just music for yourself, or if it’s library music or just experimental stuff because you want to wrap your brain around writing in a new style. Keep trying to get better at what you do: being curious about how to get better leads to its own good results. The other thing that’s super-important, but never gets talked about much, is temperament. Be the guy that people like working with! And above all, be excited about what you’re scoring: passion counts. Even if it’s a small project that won’t get many eyeballs, know that your goal is to serve the picture and to have someone walk away from that screening saying, “I really liked the music.”

In this interview, we talk to composer Brandon Roberts about his work on Unbroken: Path to Redemption - An unbelievable true story of Olympian and World War II hero Louis Zamperini. END_OF_DOCUMENT_TOKEN_TO_BE_REPLACED

In this interview, we talk to composer Kurt Oldman about his work on a SuperMansion series and also touch on his past work. END_OF_DOCUMENT_TOKEN_TO_BE_REPLACED

In this interview, we talk to Gaayatri Kaundinya about her work as a composer and singer on The Hundred Foot Journey, Jungle Book and Million Dollar Arm. END_OF_DOCUMENT_TOKEN_TO_BE_REPLACED