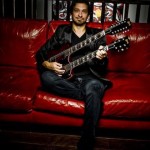 You are scoring the new season of TNT’s The Last Ship with James S. Levine. What can fans expect this season from the show?

This season, the score is going to be changing a little bit from what we had last season. We replaced Nathan Whitehead (who’s a good friend of mine by the way) halfway through season one so we were really keeping with a bit of Nathan’s style all season. This season we are going to depart from that and make it more suspenseful, thrilling and less of the traditional patriotic music that was used. We are trying to do it in a more edgy way. It’s more experimental, a lot more industrial drums/effects and lots of weird ambient music. It’s coming along great, we are more than halfway through season two right now.

What about the show itself, have you seen the episodes? Would you say it will be an action-packed season?

I’ve got to tell you this. It’s very action-packed, but also what I love about the show is the guys who run and write it, Steven Kane and Hank Steinberg. They are very clever people and wonderful writers. They are not just trying to create an explosive show. The show has an incredible plot twist and the character’s involvement is wonderful. It really explores a lot more of what is going on in America too. There is a character who got cured at the end of the first season and now in season two there are some people who aren’t so happy that the virus has been cured. So we are going to meet some new bad guys and challenges in the upcoming episodes. It’s all very interesting.

How do you and James divide scoring for the show?

That is a great question. We are actually doing a presentation on June 10th for the Society of Composers and Lyricists (SCL) on collaboration to really show in great detail what you are asking. James and I have a very common musical vocabulary. When we divide up the episode, the conversation is “Hey, I really want to do this cue” and we will divide it up primarily by what we are both interested in. For example, in one of the episodes there is a bad guy captured aboard the ship and he needed a theme. So I took his theme and wrote all of his cues and Jimmy got all the lab and the doctor’s stuff, so there is a continuity within the scenes and characters.

Sometimes we will both do the same cue to see what we can get out of it, really just trying stuff. It is very open. I have known Jimmy for 15 years now, even before he had a wife and kids so it is very easy. I knew him when he was an assistant. He knew me when I was an assistant. We’ve collaborated for so many years on so many different things. He plays wonderful gospel piano blues. I don’t know how many people do that, he’s a serious player. Going back to collaborating, one example I can tell you, I did a Fiat commercial and had to do a cover of Everybody Needs Somebody to Love. So I asked Jimmy to play on it and he helped organize the band and helped me produce the track, which is a bit more of what he does. So we have been very open about doing things like this, so when you ask who chooses what, it’s a very transparent thing. Like ok, ‘I’ll take this character and do some of this, you do that” and we run with it.

Do you have a particular character that you enjoy scoring for on The Last Ship?

You know it’s funny. For me this show, compared to something like Pushing Daisies, which was very much French crime-ish music but very harmonic and melodic. It’s not really ambient in any way, or didn’t use any electronics the way that something doing, like a procedural or killer suspense project needs. So for this it’s been wonderful to do a lot of electronic music, I don’t get asked to do that all that often. Getting back into processing, sampling and exploring that way has been a blast.

You also have another project that is different from The Last Ship, Nicholas Sparks’ first TV movie ‘Deliverance Creek’. What was your experience like on that project?

I had a wonderful experience doing Deliverance Creek. The Last Ship is great, but Deliverance Creek was wonderful in a different way. It’s one thing to work with another composer on the show, but it’s quite something different when your director is a composer as well. Jon Amiel, before he was a director, actually scored movies. It was a real wonderful thing to have him come in, we spent a lot of time experimenting with different sounds in my studio. It was nice having a composer who could verbalize in a musical way, come in and work with me.

By the way, I prefer to get comments the way we traditionally get them which is more emotional and character-based. But it was fascinating to have someone who can compose come in and talk about that. He pushed me a lot to make it something less traditional. I started with my basic themes going ok this is a Civil War era drama and pastoral American kind of thing. And he would say “No, we can use that as a color”, but it got pushed to be very electronic. It’s a caper, a robbery and we played it that way.

Did you try to avoid modern instruments for Deliverance Creek?

It was a very modern score. That was really Jon pushing. I was also working closely with Melissa, who is the writer of the show. So it was the three of us working together. Jon really wanted it pushed to be edgy and super-electronic in a lot of the bank robbery, but also keeping a hint of what you would expect. I’m glad that he pushed me. You don’t know how far you can push on a score sometimes and take risks but it’s wonderful to have someone push you to the risky place from the beginning. I think the show benefited greatly from that push.

You won an Emmy for Pushing Daisies. Bryan Fuller discussed possibly making the show into a feature. Would you be onboard with that and what would you want to see?

Pushing Daisies was such a highlight for me. I’ve got to tell you when I did win an Emmy, the first feeling was relief. It wasn’t elation. It was like this whole process is over and we can move on. When you go to the Emmys, they don’t tell you when your category is, because they don’t want people leaving the theatre and just coming for their awards. So you’re sitting there for almost five hours looking at the prompter to see which category is next. I’ve got to tell this funny Emmy story, when you get offstage there are the restrooms because everyone has to go to the bathroom from waiting on their category for so long. The funniest sight you will see at the Emmy Awards is going into the bathroom and seeing the floor littered with Emmys with all the people who have just won using the bathroom. It’s funny.

Going back to Daisies, I know there has been talk about a Pushing Daisies feature film or a musical. I know Bryan has been working with Barry Sonnenfeld on trying to find exactly what the vehicle should be for this. Yes, I would love to be involved in this and Bryan and I have talked about it. What I would love to see is the ancillary characters get their story arched. There is a lot that I don’t even know and I would really like to see the story continue. There was so much set-up in the first two seasons and I want to know where these things pay off. Just as much as anyone else I want to know what happens next.

You also scored the very successful Epic Mickey video game franchise. How long does it take to score for a game compared to a TV show?

Basically their timeline is different. We are in full swing of The Last Ship now so we probably do a show a week. That’s the schedule for us to start an episode, spot it, do the score and get approvals. Probably about a week or two. During a video game, obviously there will be a lot more music compared to 40 minutes in an episode of TV or movies which are 90 minutes or more sometimes. The difference is the timeline is fixed in a TV show and not in a video game. You are going to be playing this game for 18 hours, you are going to need music just in case you are a fast gamer or a slow gamer. What if you go down this path, then there is this music, decisions in different places, not just for one path. The first Epic Mickey took at least six months to score, Epic Mickey 2 was longer because I had to write the songs as well.

What is your go-to instrument that you like to use the most when you are scoring?

Piano is really my thing. I did not grow up as a piano player though. I started playing guitar when I was seven and trumpet when I was eight. I didn’t take my first lessons in piano until I was in college. I used to be a really good guitar player, now I am a guitar owner. (laughs)

You’ve scored for video games, TV shows, live shows, the amusement park rides (like Simpsons and Circus) – what is your favorite medium to score for and why?

I don’t have a favorite medium but just the way the question is worded, that’s the way I like it. Do a game, a movie, write a song, do a live show. If I just did an episode of TV to an episode of TV, it’s easy to get into a routine and get bored. But I can tell you this, with great certainty that there is nothing boring about my writing life. Every time you get thrown a different medium there is a different timeline. Having that variety helps my creative process, it’s a great thing. I have one more medium that I haven’t tackled yet and actually working on. I will be doing my first ballet. It’s taken about three years to write. I think I am running out of genres, mediums to write about (chuckles). I get to put that on my list.

Thank you for your time. I also must say I was a big fan of Wilfred too.

I’m always happy to find that people are responding. Coming up with that whistling tune, we got to use a lot of laughing instruments on that show. I am very grateful.

Yes! I would recommend that young composers work with seasoned composers. The apprenticeship program gives you a chance to see how the pros do it. If you make yourself indispensable to someone, there’s a great chance that work will make its way to you over time!

In this interview, we talk to composer Brandon Roberts about his work on Unbroken: Path to Redemption - An unbelievable true story of Olympian and World War II hero Louis Zamperini. END_OF_DOCUMENT_TOKEN_TO_BE_REPLACED

In this interview, we talk to composer Kurt Oldman about his work on a SuperMansion series and also touch on his past work. END_OF_DOCUMENT_TOKEN_TO_BE_REPLACED

In this interview, we talk to Gaayatri Kaundinya about her work as a composer and singer on The Hundred Foot Journey, Jungle Book and Million Dollar Arm. END_OF_DOCUMENT_TOKEN_TO_BE_REPLACED