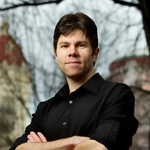 At my core I love music – I grew up playing the piano and saxophone, and later learning some guitar and drums. I was always drawn towards improvisation and composition. I had a jazz piano teacher as a teenager that got me interested in music theory, harmony, and improvising, which paved the way for me to study composition in college.

In addition to a love of music I’ve always enjoyed visual media (film/television) as well as video games. I remember playing the early Final Fantasy games on Nintendo and enjoying how wonderfully the music complemented the story, characters, and action.

What is your niche or speciality, that makes you stand out from the rest of the audio professionals?

I would say that my ability to blend both orchestral and electronic/synthetic elements helps me to stand out. I’m a classically-trained composer with a master’s degree in music composition – I’ve studied all sorts of music from Romantic era to modern-day avantgarde music to jazz big-band music and more.

In addition, while in university I had an interest in electronic music and production/mixing. I spent as much time as I could with learning the music gear I could find, even working with some old reel-to-reel tape machines! I also had a job restoring audio quality to older concert recordings that were recorded to tape.

Blending these two fronts – a knowledge and skill with the orchestra, as well as a passion for modern production sounds and techniques – has allowed me to compose with a lot of versatility for many projects.

My computer is a new 2014 Mac Pro. The sequencer I use is Logic Pro. I use a full-sized MIDI keyboard to play all of the sampled parts in (I record everything in real-time so I can give it a “performance-like” quality). I have a huge amount of synths and sample libraries. I’m constantly upgrading my sounds to expand the sonic palette.

For mixing I have a pair of Focal Twin6 Be speakers which I love. My studio room is acoustically treated with bass traps, absorption panels, and reflective panels for a clear listening environment.

I also have guitars and basses (both acoustic and electric) which I will record for various projects. I play saxophone as well, though only found a couple of projects that needed it!

For strings I use several sample libraries: a mixture of 8Dio Adagio, 8Dio Black, EastWest Hollywood Strings, LA Scoring Strings, Orchestral Tools, and Symphobia. For brass I currently like EastWest Hollywood Brass a lot. For synths I use all kinds of instruments from companies like 8Dio, Heavyocity, Sample Logic, u-he, and more.

For mixing plug-ins I have many Waves plugins. I also enjoy audio plug-ins by iZotope, such as Ozone, Trash, and others. Sausage Fattener is a fun new plug-in I’ve acquired.

When the deadline is tomorrow! Just kidding =) Actually as the years have gone by I find that it’s easier and easier to get into the creative mode – it’s almost like you train yourself to be creative when it’s time to go to work. I’m writing music almost every day, so I don’t step outside of the creative realm for very long. Personally I tend to be more of a night owl so I’ll arise a bit later in the day and will often work into the evening.

For video games it generally starts with a meeting (face-to-face if possible) with the game developers. We will discuss the content of the game and its creative vision. I’ll look at lots of concept art, read the back-story, view a build of the game, etc.

After that I start to brainstorm musical ideas and approaches that can work for the game. A recent game I scored called Dawngate (Electronic Arts) has very vibrant artwork and characters. After viewing the art I started to get ideas for how I might blend exotic percussion and hybrid synth sounds with the orchestra to create a very colourful musical palette.

Once I have a general overview of the score I usually compose the main theme first. This helps me get a solid start on the score, as it’s such an important music cue. Then I will proceed with the various combat cues, exploration cues, win/lose music, etc.

Creating music for films starts in a similar fashion by viewing the film and talking with the director to learn as much as I can about his creative vision. I’ll take notes of any musical ideas that come to me that may benefit the film. I think for film it’s also helpful to compose the most important scenes first, as that can pave a solid groundwork (and thematic material) for composing the rest of the film.

As always it’s a collaborative process, so I’m open to feedback and revisions during the composing process.

I wouldn’t say there are any secrets, at least none I know of! The most important thing is diligence and practice. The more one does a certain task the better they become at it.

To be creative one has to draw inspiration from many sources. I’m always listening to new music, and often study and analyze the music to better understand it. There’s almost always an orchestra study score I’m marking up as well – this helps me learn new techniques and continue to improve. You need a technically mastery of the techniques (which for composition includes music theory, orchestration, and production/mixing skills).

Part of creativity is being able to “let go” and just follow the inspiration. You need the courage to take risks at times and “flow with experience”, so to speak. =)

One fun example was on an album of dark trailer music I composed for Position Music. In one of the tracks I recorded myself breathing in a disturbing manner, and I turned this into a rhythmic “motor” of sorts for the piece (with the breathing moving in-time with the rest of the music). It helped contribute to the creepy track.

One lesson I learned is the importance of discussing the musical approach with the game developer/director/etc. BEFORE you start composing. It’s always more efficient to hone-in on the desired music direction and make sure you understand it well before you start composing, otherwise you can end up doing a lot of re-writes. =)

I would say above all follow your passion! It sounds cliché but I think it’s true. I was reading a book recently in which the author stated that unless you have a real passion/motivation for what you are doing, it is unlikely you will succeed and go far. That resonated with me. If you can discover what it is that you really love, and then put your soul into doing that as best as you can, to me that is the seed of real success and accomplishment.

In this interview, we talk to composer Brandon Roberts about his work on Unbroken: Path to Redemption - An unbelievable true story of Olympian and World War II hero Louis Zamperini. END_OF_DOCUMENT_TOKEN_TO_BE_REPLACED

In this interview, we talk to composer Kurt Oldman about his work on a SuperMansion series and also touch on his past work. END_OF_DOCUMENT_TOKEN_TO_BE_REPLACED

In this interview, we talk to Gaayatri Kaundinya about her work as a composer and singer on The Hundred Foot Journey, Jungle Book and Million Dollar Arm. END_OF_DOCUMENT_TOKEN_TO_BE_REPLACED