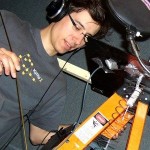 Disclaimer: I am answering those questions as an independent sound designer. Any views or opinions expressed here are simply my own, and do not necessarily represent the views or opinions of any company, corporate entity or anyone else.

Hi, my name is Jean-Edouard Miclot and I’m currently senior sound designer on Killer Instinct for Xbox One. I started in film post-production at Keystone Entertainment on the Air Buddies franchise and got my first gig with Epic Games on Gears of War 3. Then I went to Ubisoft Vancouver to work on Motionsports Andrenaline before moving to California’s Double Helix Games. I still do many small projects on the side like Transform, a sound effects library that you’ve probably heard in the recent movie “Man of Steel”.

How important do you think music and sound design are for enhancing story telling?

Sound is an amazing storytelling tool and I’m afraid there’s not enough room in a single paragraph to talk about it. We all seem to be very conscious about visuals and unaware about sounds, as it tends to fade out in our subconscious. But this is actually fantastic! That means we can do things with sounds that visuals will never be able to achieve. That’s also why sound doesn’t get all the respect it deserves. If you take the reactions of the audience after watching a movie, you’ll get tons of details about the picture but almost nothing about sound. It’s like cinematography, if it’s well done, we never realize that the camera is slightly shaking but it does have a huge impact on the audience and it allows us to play sounds with a different point of view.

Ambiguity is also key in storytelling and it becomes more interesting when we feel involved. All we need to do is follow the question marks left from the story and use our imagination to find the answers, then we think we have a clue and another question mark shows up… it’s entertainment! What you certainly don’t want to do is be redundant and use dialogue, music or effects to say the same story from the same perspective.

How do you perceive sound in everyday life?

I think we hear sounds like everybody else, hopefully, but we probably don’t perceive them the same way. We simply react to a sound if it catches our attention and it triggers our emotional response.

Using non-literal sounds is probably one of the most powerful tools we have to surprise our audience and the trick is to find some credibility, that’s where it gets complicated. I have a quote on my desktop from Dane Davis that says, “The best sound editing is the most familiar and the least predictable”. For example on Killer Instinct, I’ve used really silly things like duct tape, rulers, cardboard box, plastic wrap, ice cube trays, my frozen jeans, some old t-shirts, some elastic bands, a wooden chair, a rotten pumpkin, a broken glass, a poster, a snorkelling fin, my flip-flops etc. It doesn’t matter what things are as long as they produce the feeling that you’re looking for and seem credible to the audience.

Do you think that a single sound can define a character and why?

It’s not uncommon in movies to often have a single sound or a theme that define the character every time he or she makes an appearance. As soon as you associate an abstract sound to a character or an object in a film, there’s a subconscious connection that occurs. Later in the movie, if you use that same sound with a different element of the plot, it will create an association between the two. The audience will feel that connection but won’t really notice it and that’s the kind of thing, according to me, that makes sound so powerful.

How do you decide which sound is appropriate for a certain event (whether in game or film)?

Sound designer legend Treg Brown said that he never used the appropriate sounds. We do entertainment so we want to find something cohesive and exotic at the same time. I usually start with our design documents then I talk to our producer, our game designers, our lead animator and our art director. They usually give me all sort of practical information about the characters like their backstories, their states of mind, their motivations, their gameplay mechanics, their key poses etc. Then I summarize it all into a few words that become my road map.

As you probably already noticed, I like cognitive science and I like Randy Thom too… but I like cognitive science more. It made me realize that most of us think too literally, which seems to limit our ability to find elusive ideas. So I search for random sounds and I let probabilities discover the best ones for me, like Randy does. I usually decide that a sound is un-appropriate enough to be appropriate when there’s simply no more time to change it.

What is your usual process for creating audio content for games, films etc. (also something about equipment you use)? 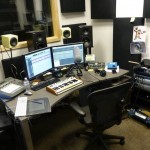 At work, I currently have a PC, a standard ProTools HD rig loaded with plugins and coupled with a RME Fireface and a Command 8 mixer. Speaker wise, I have a large 5.1 Mackie system with a Bluesky bmc mkIII surround controller and a pair of Avantones. I also have an iMac on the left side for my Kyma system hooked up to a Wacom tablet and a midi keyboard that I also use for Kontakt and S-Layer. I’m lucky enough to have my own booth so I do a lot of wild recordings and voice over in there too. We have 2 Tascam DR680 recorders, a Neuman u87, a TLM103, a RSM191 and a Sanken Css5. Additionally, I bring my own recorders and microphones when needed.

Where do you feel the sound design is headed? The future of sound in games, movies and other areas.

Look at how much film sound has evolved over half of a century… It has barely changed! I mean, technology has done a lot to sell a new experience to the consumer, but the way we tell stories and we use sound creatively hasn’t changed that much. With Dolby Atmos, Theaters have put a lot of effort delivering a new cinematographic experience. The Oculus Rift is certainly going to revolutionize our perception of reality in video games and I’m sure manufacturers probably already have the next generation of surround headphones. But with technology always offering more, we tend to forget that we’re artists before all. Back in the analog era 30/40 years ago, limitations forced sound people to make better creative decisions. Nowadays, we significantly spend less time thinking as we rely more on technology to help us solve poor decisions that we should have changed at the beginning. But it takes much more to develop a very well crafted dynamic composition.

One of the things we’re always looking for is a way to morph sounds. I worked on a movie called Treasure Buddies and in one scene, the voice of a puppy called Mudbud had to transition to a real howl. If you took the beginning of the actor’s howl and tried to crossfade it with the animal, the two pitches had too much fluctuation and didn’t seem to blend seamlessly into one voice. So I processed the files in real time with Kyma’s Time Alignment Utility and it got almost real! Check it out at 46sec: Youtube link. This morphing technique only works great with sounds that have strong harmonics and a similar pitch though. Let’s say you try to morph a tuba with a piccolo, you’re obviously going to hear a significant pitch rise that won’t sound natural. I found a few other interesting manipulations while working on Killer Instinct. If you’re keen to know more about it, Mick Gordon and I will have a talk at GDC 14, you should come!

Let`s talk about the other skills a sound designer should posses. Which other skills in your opinion besides technical knowledge are important?

If you’re already a sound designer, then we’d expect you to have a basic theoretical and technical package. What makes every person unique is his or her own experience in life; art, sports, politics, economy, geography, science, religion, history etc. The more you know about anything, the more you become valuable and complementary to a team. That’s why you shouldn’t neglect the hobby section of your resume. If you’re just determined to learn everything you can about film sound or game audio only, you’re probably missing out on a huge opportunity to develop other unique skills. I personally love travelling, fly-fishing, skiing, cooking, and psychology, which I often seem to draw inspiration from. Communication, organization, and troubleshooting skills are also a must to have.

What demystified my fear to make mistakes is that a lesson learned can only make you a better person. Recently, I wanted to lower the overall volume of a trailer to induce people to turn up their speakers, giving me extra headroom for the loudest and most dramatic moment at the end. It was working fine offline but I didn’t consider the youtube commercials preceding the youtube videos, and it didn’t work. Even the veterans in our industries make mistakes… If you’re not willing to take high risks for high rewards, you’ll probably never explore any limits.

Any tips, hints or motivational speeches for our readers?

Thanks everyone for reading so far! Finding the balance between work and life is not always easy in our field and I hope everyone will spend some time with their loved ones in a few weeks. I wish everyone a merry Christmas and a happy new year 2014!