We have interviewed Nicolas Raynor and Sebastian Pohle (senior sound designer) from the game Wolfenstein: The New Order.

How long was the sound design process for Wolfenstein: The New Order?

Ideally sound would be considered at all stages of the project, allowing close collaboration between disciplines; but unfortunately this project had already gone through the pre-production phase before the sound team started to form, so we had some catching up to do. So the next 2.5 years of development was quite an intense time spent between gathering resources, building the team (our final member joined 3 months before shipping), improving the tech to suit the needs of Wolfenstein’s overall goals, getting professional audio rooms designed and constructed and finally, making the actual game.

Did you do a lot of location recordings for the game? Any special stories you could share from those?

Apart from the large core recording session that Sebastian has outlined, there were a handful of smaller recording sessions conducted by Gustaf (senior sound designer). A large part of his focus on the project was all of the player and npc movement elements, and he took a hands on approach to filling out the libraries source material for this type of content, with a particular focus on creating a natural and believable feeling for the games characters.

Any new approaches or techniques you applied to the sound design of the game? 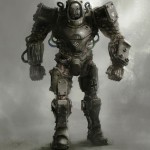 For cohesion between the physical sounds and gutteral voice of the Supersoldaten, I created short convolution impulses suitable for use in Izotopes Trash. Using this, Karl (Voice Designer) was able to incorporate the overall supersoldat tonality into his work. We also had a similar approach to the robots. Throughout the game the robots communicate via glitchy digital noises, inspired by the old modem sounds. Later on in the game we get to meet a newer creation of Deathshead’s (the main antagonist) which is the prototype robot.

This robot can actually speak, but in order for us to link it to the already established robots, these design elements were incorporated into the actual voice. During this process many different types of vocoding and convolution were experimented with. This process was fruitful in more ways than just the content produced, as we found that even though we were under intense pressure to hit deadlines, it was still important and motivating to be able to be experimental and try different techniques than our normal ‘go to’ approaches. 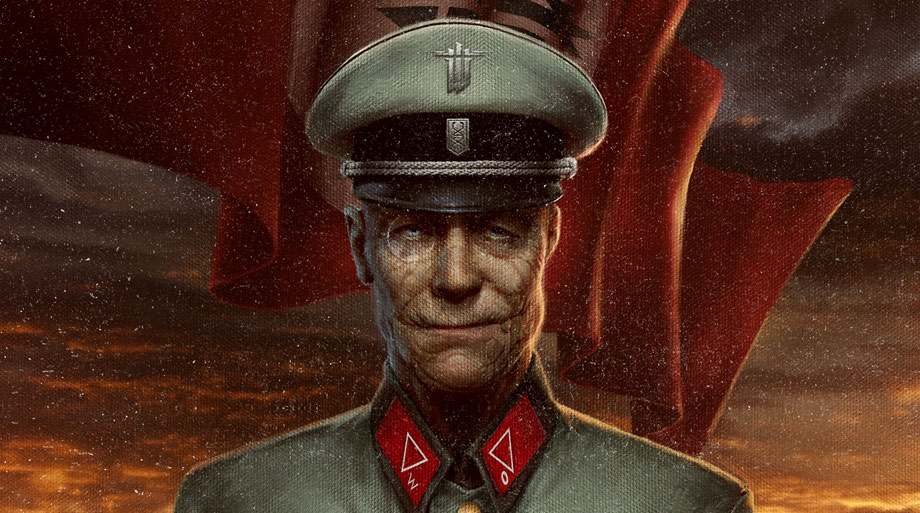 How much collaboration did you do with composer Mick Gordon? Did the music influence the sound design?

Micks influence is a positive force in many ways, from inspiration to sheer enthusiasm. We have a group called the Da’at Yichud in the game, who are responsible for ancient and very powerful technology. Mick had sound sources fed through a resonating cymbal contraption to create a unique tone for his music, that led on to influence the sound design for that specific environment. So in keeping with this resonant tone, Gustaf went and recorded Tibetan Singing bowls which tie in nicely and add to the mysticism of the environment. You will also find, that if you take down a drone, the squelchy goodness you hear just before they die comes straight from Micks Eurorack Modular synth.

The game uses the iDTech 5 engine. Can you tell us a little bit about the audio capabilities of the engine and how did you use it in the game (real-time processing etc.)?

Unfortunately the engine was quite limited when we got it. In a sense it still is, as every update we want to do has to be implemented 3 times to ensure we have coverage for all platforms, which is costly when on a tight schedule. The engine has a HDR system imposed on top of a normal dBfs scale, which can get complicated at times. Effectively anything in positive gain (>0dB – something sound guys are pre-conditioned to fear) pushes up the window and extends the range.

Nearer to the end of the project we also had loudness meters integrated into the engine, which conform to itu bs. 1770-3. We chose this standard to fall in line with Sony’s ASWG. Once this was in place it was much easier to gain an understanding of relativity when implementing new content. We have no real-time DSP except for the standard algorithmic reverb, and low pass filter on each channel. This meant that having real-time dynamic audio was tricky to achieve, so we always had to fall back on manipulating content offline with layered implementation, often utilizing a stereo interleaved distance system, where left channel is close and right is far, with a linear fade over a specified distance from listener. 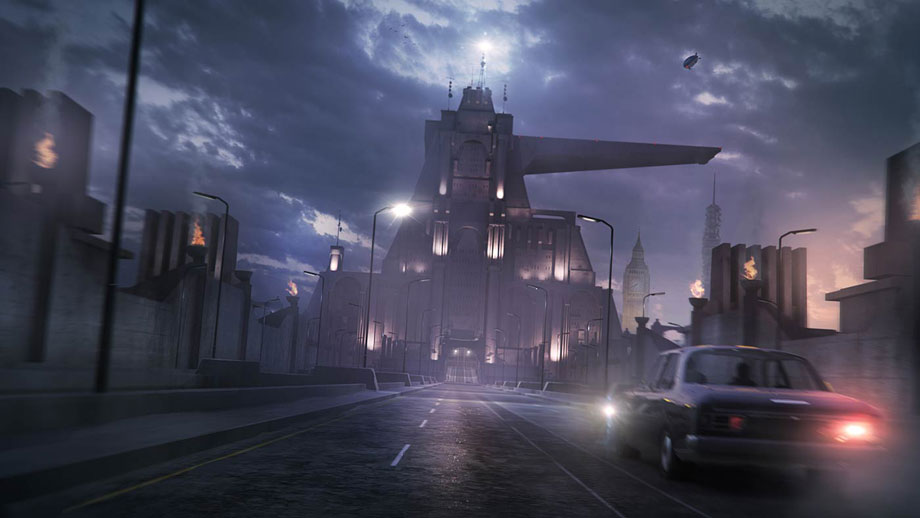 How long was the sound design process for Wolfenstein: The New Order?

The main design process started two and a half years ago with researching references of what the WTNO sound id. should be. We pooled videos for superimposing and all kinds of references we thought had a similar tone of what we were trying to achieve. WTNO is set in a fictional world with real world and Sci-Fi elements so the goal was to combine all those. It was clear for us that the Sci-Fi elements should be gritty, rusty and mechanical with electric elements rather than smooth and modern “Transformers” style. The real world element should be larger than life rather than close to reality. Kind of a mixture of Saving Private Ryan but with the weapon punch from “Inglorious Basterds” or “Machete”. Also all Sci-Fi guns should have these elements, so we used mainly real world source with little synth stuff as for example on the LKW. To create something unique we avoided common techniques like slinky for lasers or using pure synthetic source.

In the end we called the projects style “Tungsten”, as a heavy metal it felt appropriate, and was in keeping with the projects working name. After we determined our “sound id” we went through the game docs and walk throughs, writing down in an excel sheet what source we potentially could need. This was mainly imagination because the game was only developed a little at this point and most ideas just existed on paper. After we had gathered all the information, the asset creation began and lasted up until polish and even to some further extent.

Did you do a lot of location recordings for the game? Any special stories you could share from those?

With the excel list mentioned above I went to a 2 week Foley shoot in Germany. As we already had been a bit late with pre-production we needed to get stuff done pretty immediately so we chose a foley artist and stage (Torus) I had worked a lot with back in my film days. Knowing the foley artist (Wilmont Schulze) and his way of working saved us time you usually spend on introduction and try out phase and we could start at day two with actual content recording.

We recorded everything from footsteps to robot movements for all the different enemies and surfaces, tons of generic stuff like gore sounds, water movements, metal impacts and so on. Always our gritty and heavy Tungsten tone in mind so we used the biggest stuff available at the stage. At the end of almost everyday, Wilmont was completely exhausted from 8 hours banging and moving heavy metal stuff around. It was pretty hard work but also a lot of fun.

After this two weeks we had recorded about 40gb of source which ended up being our go to Tungsten “colour palette”. Stuff we knew which will be heavily manipulated later on was recorded in 192k with a stereo pair of Sennheiser 8040s. Other than that we used a Sennheiser 416 shotgun, Schoeps CMC-64 stereo pair and a U-87 depending on what kind of source we here recording. One Mic which gave very interesting results and made the sound already sounding pretty big without manipulating, was a Pressure Zone Microphone by Audio Technica. A little bit of colour was already added during recording by running the signal through outboard equipment such as the SPL Transient Designer Model 4 for transient control, Focusrite ISA 110 for slight EQing and Focusrite Red 6 and two Focusrite Track 1 as pre-amps with a Digidesign 192 I/O interface. During the entire project we now and then recorded bits and pieces which hadn’t or couldn’t been covered by the foley session with our Sennheiser 8040/mkh416 + 702 portable setup.

How much collaboration did you do with composer Mick Gordon? Did the music influence the sound design?

Mick did a stellar job on the game and nailed it from his first deliver in the pitching phase. He also was working towards “Tungsten” style and used a lot of chained up guitar pedals and outboard equipment to add the special sauce to his score. For WTNO he ordered 4 custom build distortion units which are called “The voice of God” we also used it on some bits and pieces in the sound design but most of our sounds have been designed in the box. For experimenting with outboard equipment we simply did not had the time but is on our list for future projects.

Also he had Richard Devine generating a library to work from which we also used as well on sound effects. Music and sound design influenced each other a lot in the cinematics. Jan Petzold from Torus (our outsourcing partner for cutscene audio) designed and mixed on top of his music (if it was already available) or the other way round so that music and sound scape were never in each others way. At the end of the project, Mick joined our team for two weeks to participate on this awesome thing which is called crunch and we went through hell and all the cutscenes so that Jan could do the final mix pass and everything was playing together as intended.