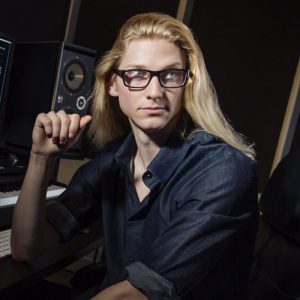 Let’s start by introducing yourself and telling us a little bit about your background in music?

Well, my name is Matthew Carl Earl and I am a composer for video games.

I got my start in music when I was about 6. Though, I didn’t start taking music seriously until around high-school, where I had myself convinced I would be some kind of ‘professional rockstar’. I tried to learn as much as I could about music theory as well as digital audio recording and was a weekend apprentice under Paul Murphy at a local recording studio. Upon leaving high school I studied with Dr. Norman Weston at Saddleback College and at the same time was teaching private music lessons and writing/playing with the metal band Xanthochroid (whom I am still involved with).

I quickly realized that I really wanted to be writing music for media, specifically video games as I have had a love for their music my whole life and has greatly influenced my writing. So I started to steer my musical path in that direction in early 2014. Fast-forward a few years and now I’m here!

Let’s talk about Arena of Valor. How did you get involved with the project?

Tencent reached out to us, about two years ago and asked us if we would like to be involved with creating the music for an international version of their flagship MOBA “Honor of Kings.” We were obviously quite interested in the prospect and I began writing shortly thereafter.

How do you prepare for a project of this scope?

The more communication with the design team the better. Collecting art and story from the lore helps tremendously. We also throw musical references back and forth before beginning so everyone kind of has the same ideas and expectations on what the game should sound like. Also, because this was the international version of “Honor of Kings” we had a ton of awesome music to draw inspiration and even melodic themes from.

You are not the only composer on Arena of Valor. How did you make sure that your score was cohesive with the other composers’ work?

In this type of game, the most important thing about the music is the primal, reactionary response the players will have while in the arena. Jason Walsh is the other composer from our team who handled a lot of the electronic heavy cues for the E-sports tournaments as well as some of the character specific tracks and we discussed at lengths amongst ourselves, as well as the rest of the sound team, about the emotional direction of all of the music to make sure the players were getting their adrenaline filled, competitive atmosphere while keeping a cohesive sound throughout the game.

Can we get a little bit of the insight of your creative process while you worked on Arena of Valor?

I approach all of my music in a similar fashion. It usually starts with reading story and viewing art as reference, then I take some time to think. Not just about melody but also what the music will really sound like. What colors I will use in the instrumentation and harmony, and what weird things I can try to push it over the edge.

When I actually sit down to write I usually start with a piano and hammer out some of the musical ideas I came up with as a template. Then just start recording on top of that. It’s kind of like sculpting in reverse. Just adding lots of layers and colors that will contribute to the overall sound.

What do you think was the most difficult part of making your score for Arena of Valor?

For me the biggest challenge was trying to create these huge, bombastic tracks that were ‘larger than life’ yet still sit in the background of the experience. Because, the whole goal with the score was to fuel the player’s emotions and stir the competitive spirit.

I know you also do vocals on some of your work. Was this something that you set out to do or did it happen accidently?

I definitely didn’t set out to do it in the beginning, but it’s become such a part of my workflow now, that I can’t go back haha. The technique really started back when I was trying to produce records for my band and wanted to achieve a choral effect. We didn’t have virtual instruments nor a live choir to record, so we just wrote out the music and tracked ourselves singing it a million times in different voice styles until it sounded like a choir.

One of my favorite tricks of all time is taking the recorded vocals and then reversing the audio, effectively putting all the notes and words in retrograde motion. It’s a really great way to come up with new ideas based on the same material. We did this quite a bit in my bands 2012 release “Blessed He With Boils.”

I do almost all of my work inside of Pro Tools. A lot of people dislike it compared to other DAWs like Cubase or Logic. But it’s been great for my workflow and I’ve used it since the 9th grade.

Another big tool is the little recorder in my iPhone. I’ll sing or say ideas into it all the time while driving and then if I’m ever stumped I can look through my catalog of past ideas to draw from.

I’d say learn as much as you can about producing great sounding music from start to finish 100% DIY. Create some fantastic sounding demos and then just make some super talented friends. Not only are these the people that will go on to do awesome things that you could one day be involved with, they are also the kinds of people that will force you to grow and learn about your own craft and make you a better composer.

In this interview, we talk to composer Brandon Roberts about his work on Unbroken: Path to Redemption - An unbelievable true story of Olympian and World War II hero Louis Zamperini. END_OF_DOCUMENT_TOKEN_TO_BE_REPLACED

In this interview, we talk to composer Kurt Oldman about his work on a SuperMansion series and also touch on his past work. END_OF_DOCUMENT_TOKEN_TO_BE_REPLACED

In this interview, we talk to Gaayatri Kaundinya about her work as a composer and singer on The Hundred Foot Journey, Jungle Book and Million Dollar Arm. END_OF_DOCUMENT_TOKEN_TO_BE_REPLACED