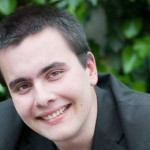 Tell us a little about yourself and what you do for a living?
Hello, my name is George and I am a full-time composer, orchestrator and arranger from Sofia, Bulgaria. I have played the piano since I was 6 years old, but my true passion for music emerged when I first stumbled upon music production software – at that time this was Fruity Loops, version 2 or 3 I think. Since then I kinda became obsessed with music and slowly this became my career. Right now I am finishing my Masters degree in Choir conducting and compose for a living. I am also an orchestrator and arranger, working with various ensembles here in my country and I am also manager of Sofia Session Orchestra & Choir. I started my contracting company one year ago and a while later – my sampling company. So basically right now I am composing, contracting, conducting and sampling – pretty much I’m surrounded by music 24/7!

What is your niche or speciality, that makes you stand out from rest of the audio professionals?
Well this is a thing that is hard to answer! I am mostly working in the “Soundtrack” genre (though I do hate the term). I love intimate and emotional music (strings, piano, pads) and of course – huge and ‘epic’ orchestral works. If I am to judge by my soundcloud listens, my “huge” success was the track “Roof Chase” – so I guess I can write action and suspense tracks?

Can you give us a brief summary of the equipment you use regularly?
Sure thing! First, I am listening through my Genelec 8030A monitors. I am really used to their sound and personally, I think that for acoustic/orchestral music they are spot-on! For precise audio editing I use my AKG k271 Studio. Everything goes out of RME HDSPe Aio. All the other stuff is not that important – I have a mediocre MIDI controller, a small mixer, three monitor displays (2 for Cubase, 1 for video).

What are your go-to plug-ins and software? (virtual instruments, audio processing etc.)
Well, I will start with my sample libraries – last year I had most of East West software, but had some playback issues due to their PLAY engine. This is why I decided that I should go with Kontakt-based software and right now my template has the following plugins:

Cinematic Strings – this is one amazing library, suitable not only for epic and powerful stuff, but for small and intimate string works – I am using it right now on dramatic Bulgarian TV series.

Berlin Woodwinds – Hendrik and the other guys at Orchestral Tools have made some splendind sampling libraries and by far those woodwinds are some of the best on the market. Really impressive legato scripting, double-tongue patches and trills. Just ready to be used ‘out-of-the-box’! And has some really neat programming for more vibrato or even adding keyswitch noises!

ERA: Medieval Legends – created by the amazing Eduardo Tarilonte, ERA captures something that most sample libraries don’t have – the heart and spirit of the musician. It might be something stupid to say, but his libraries are closest to the real thing to me. With all those tiny details and ‘imperfections’ of the live recording.

East West Quantum Leap Hollywood Brass – apart from some of the issues with PLAY I had and sometimes still have, HB is a really nice sample library – especially the french horns!

For synths I use U-HE Zebra and z3ta (both versions).

For pianos I found that Native Instruments “Alicia’s Keys” is a splendid product!

Also I use other plugins like EWQL Orchestra Gold (mostly for some of the percussion/mallets), Hollywood Strings for string layering, Storm Drum 2, QL Ra, QL Goliath, the built-in Kontakt library (I love the harp there!), Drums of War, QL Pianos Gold, some other smaller libraries and, of course, the products from my sample company.

As far as processing I mostly use QL Spaces as reverb and the Valhalla verb plugin (the latter is an amazing find, I strongly recommend it. And it’s $50!). For compression and EQ I use mostly the plugins inside Cubase (and I love Cubase 7’s channel strip)… and of course Waves, who could work on something without Waves’ help? They are kind of expensive for me, though, so I don’t have the whole palette of FX, just some.

When do you find you are most creative?
Mostly in the mornings. I usually get up at 8AM, have a cup of tea/coffee and head to my studio (it’s 15 minutes away from my home); when the weather is fine I travel with my bycicle and driving in the morning does feel really inspiring. The thing with being creative is that if you have a tight deadline and one important project to finish up, then you can’t afford not to be creative. I rarely have ‘creative blocks’ but when I do – I’m so depressed I can hardly eat or think. But one thing I can tell for sure – when I have a project that needs to be finished in time, I am really, really creative. Basically – all the time. But when I finish some of those projects, the client is happy and, say, I want to work on a personal project of mine… well, then always seems that all my creativity has dissapeared.

What is your usual process for creating audio content for games, films etc.?
Well, I will start with films, since this is my main area of work. Usually after I get contacted, I have a couple meetings with director/producers (depending on the budget of the film – sometimes the directors of the short-films or documentaries are producers themselves; right now I work in a team with 2 directors and 4 producers – and getting adequate feedback is something difficult, mostly because it’s subjective – one of them will love the tracks, the other one would hate them). After those few meetings they send me the locked cut of their movie; again, depending on budget, I could be contacted by the music editor who is a creative supervisor of the project.
Afterwards I have a certain amount of time to finish the score and discuss it with the directors; some of them prefer to come to my studio and change the music in “real time”. Some just want the finished stems. The final part of the process is preparing the audio for post production – whether it’s a stereo mix or 5.1 dolby mix, whether the production team, responsible for the final mix, wants something special.

As for video games – I don’t have much experience there, just a couple of small games. But usually I go to the studio, play the game and discuss ideas with the creative director. Sometimes they send me an alpha/beta version that I play and then compose the music. I prefer not to be involved in audio programming or sound design, just music. Therefore I always discuss my ideas and final mixes with the guys, responsible for the audio implementation.

One of the hardest things to do in my humble opinion is writing music for theatre. I always found this really hard, since each time the actors are on stage the timing is different. I did the score for an avant-garde play, called “The Walled in ones” that has a huge amount of music in it – and the director wanted to have some of it as a backing track to monologues or action; and sometimes the actor would exaggerate a word, or just talk slowly – and the whole timing gets away.

Are there any particular secrets to your creativity?
I always play my ideas on a piano first and always try to make a nice and interesting voice for each instrument – even if the tracks will never be played live. Good voicings and proper orchestration help a lot.

Do you have any audio creation techniques that resulted in something interesting?
I am not sure whether this qualifies as ‘interesting’, but I always tend to record something live on a project – and I definitely recommend doing so. First that is because we all use the same samples and composers should try having something unique to their style (not only in terms of composition, harmony, orchestration). One of the best examples for that is Marco Beltrami’s score to “3:10 to Yuma”, where he did all types of experiments – recording plucked piano, harmonium, etc. Jerry Goldsmith also experimented a lot of “Chinatown” (which is a beautiful score as well) having 4 prepared pianos. Also, recording live instruments always brings more feeling to the tracks – even a small darbuka, recorded on top of epic drum samples.

Any specific “lessons learned” on a project that you could share?
Yes, I would like to share a story from the beginning of my career – five or six years ago I was invited to work for an online documentary television programme that has 1:40 minute tracks on background of different cultural videos. There was no voice over, so the music shouldn’t have been too repetitive. I was invited together with a couple other composers to participate but the payment was extremely low and we had to do 1 hour of original music (~ 35 tracks) a month. The schedule was really tight and after a while some of my colleagues said that this job was rubbish and one by one they quit or just stopped delivering files. I agree – it was not my perfect job, but at that time I had two choices – to either work really really hard as a composer and earn a small salary, or earn basically the same working as a construction worker/bartender. Not that I undervalue different jobs, but my true passion was music – so I started working day and night for that documentary television hoping that some day I will score bigger projects. One year later the same studio that did the TV created a 60-minute documentary series – and till now I’ve worked on more than 10 of their one-hour films! Not only that, I worked on more than 14 hours of original music for their television and thus improved my workflow, my skills in MIDI mockuping, mixing, orchestration, composing, harmony AND earned money for that – which back then helped me slowly build my current equipment (software and hardware).

Any tips, hints or motivational speeches for the readers?
Yes, after the last question – do not be afraid to work and do not whine when you’ve got too much work to do. Do not forget that there are many available job positions for, say, graphic designers / 2D artists / programmers, but there is usually only one for the composer. So if you have any kind of work as a composer – stick to it, always try giving 110% out of you and it will be paid off sooner or later!

In this interview, we talk to composer Brandon Roberts about his work on Unbroken: Path to Redemption - An unbelievable true story of Olympian and World War II hero Louis Zamperini. END_OF_DOCUMENT_TOKEN_TO_BE_REPLACED

In this interview, we talk to composer Kurt Oldman about his work on a SuperMansion series and also touch on his past work. END_OF_DOCUMENT_TOKEN_TO_BE_REPLACED

In this interview, we talk to Gaayatri Kaundinya about her work as a composer and singer on The Hundred Foot Journey, Jungle Book and Million Dollar Arm. END_OF_DOCUMENT_TOKEN_TO_BE_REPLACED