In this review, we will be looking at the debut sound effects library by Frick and Traa called City Bicycles. This library is all about bicycle sound effects but first a disclaimer. When I received the library for the review, there was a small issue with its naming convention. The folder names were too long for windows based computers to read. I have notified Frick and Traa about the issue and I am happy to say that they already amended the issue and notified their users about the issue. The issue apparently didn’t occur on Mac computers. I will share more thoughts on that in the metadata segment. That out of the way, let’s get on with the review.

The library comes with four main bicycles on a few surfaces and few extras. Combined, the sound effects library will take around 6.5 GB of your hard drive space. Considering this library is only about bicycles, I’d say it’s packing a lot of content (630+ sounds or 5+ hours of content).

1. Four main bikes on asphalt
2. GoodBike on other surfaces
3. Handling & other bicycle noises
4. Various other bicycles passing by

The first two come with three microphone positions (On board, Roadside A and B), each sounding differently. The on board position is something to look for as it nails the right sound for all four bikes. Roadside A and B perspective are your standard pass by takes, one being mono and the other one stereo. More on that later.

Handling and other noises include, as the name suggests, various bicycle noises from bounces, hits and wheel movements. Although, it’s a great addition to have in such a library, I would like to see more of the wheel spins, but that is just me being picky.

The library is delivered at 96 kHz and 24 bit which is perfect if you want to pitch and stretch these sounds. It includes exterior recordings, which at first I was a bit afraid of getting a lot of city, people and/or bird noises. Happy to report that there are almost none of those in this library which is fricking fantastic. This could be due to location in which the library was recorded or due to Frick and Traa’s editing skills. Either way, it sounds really good and instantly usable.

Each bike has its own distinctive sound. Good bike sounds clean with minimal rattle sounds where Bad bike, you feel, is almost about to break. Racer bike has a lot of clicks or what it sounds like gear changes in the takes, which I didn’t like as much as other bikes. Ugly bike sounds pretty much neutral to me (simple tire on asphalt with minimal rocky clicks).

The one downside is that all four bikes are only available for the asphalt surface and only the Good Bike has other surfaces like grit, rocks and icy road. One important thing I would like to mention is that on board perspective takes are long (2 – 3 minutes), so you won’t have to worry about looping sounds too much unless you are working on a bicycle game.

Roadside perspectives A and B include various pass by’s of the mentioned bikes in mono and in stereo format which gives you a lot of room to play around. Whether you decide to pan the sounds using mono takes or use stereo sounds it will be up to you. I prefer both.

Other sounds included in the library also sound very good and clean though I will say that I missed some of the isolated wheel spin sounds in this library. The various bike sounds are some of my favorite sounds in this library just because they offer a lot of different bicycle sounds which could be layered with the four main bicycles. You can hear them in the example I made in the last part of the video.

All in all, sound wise, this library is very well recorded and edited to suit most occasions where bicycle sounds are needed.

As I have mentioned in the beginning of this review, the library had some issues with its naming convention. The problem being that the folder names were just too long for Windows to handle. The added information like “good for layering” is pointless in my opinion and doesn’t bring much to the table. Having said that, included BWAV metadata is good and well named.

Since everyone uses metadata differently, for me, the important part is that I am able to find the right sound. So, for instance, I am looking for a bike on an asphalt, I would type “bicycle, asphalt, pass by“. Whether this is a good bike or a bad/broken bike, it would depend on the scene. This library does provide what I need, but as always I am including screenshots from Reaper, Soundly and Metadata Touch for you to check out and decide for yourself. 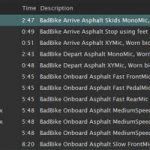 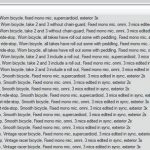 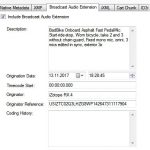 For this example, I found some public domain footage and replaced the sounds with the sounds from the library. The sounds weren’t modified in any way nor did I use any effects or filters. Unfortunately, I wasn’t able to find any on board bicycle ride that was in the public domain. Some minor volume adjustments had to be made but overall this is what you would be getting.

For 129 Euros (now 99 €, as its on sale) City Bicycles is worth getting if you are in need of great sounding and well edited bicycle sounds. It may be a very specific library but it surely does cover a lot of bicycles on a few surfaces.