Search
Home
Featured
I recently stumbled upon a graphic novel called Fall of Gods, a story following Vali, a warrior haunted by his past, but who has found peace in the arms of a woman. I still haven’t finished the novel but I was very intrigued by its original book score. Score was composed by Francois Jolin who is also a co-founder of Eon Sounds, so I reached out to him to talk more about the original book score.

Hi Francois, thank you for taking time to do this interview. Let us start with the basic questions first. Tell us a little bit about yourself and how did you get your start as a composer?

Hello Zdravko and thanks for this opportunity! I am a composer from Montreal, Canada. I started making music in my teens, had my first guitar at 13 and then I started playing drums in a metal band.

I started composing for films in 2002 with a Montreal production company, this gave me an opportunity to learn my chops on a film. At the time I was composing all into a synth sequencer with onboard sounds then getting in studio and recording the sequence output. It was a great experience, I believe when you are limited by gear it can often help extend your musical skills.

You are also a co-founder of Eon Sounds. Tell us a bit more about Eon Sounds?

Eon Sounds is an agency type production company. We cover all audio needs for productions but more specifically music supervising and scoring. We launched the company in 2013, since then we worked on a number of projects and created a catalog of pieces that can be licensed. We basically aim at being one-stop shop for audio needs, bringing top talents and artists to the table.

A graphic novel Fall of Gods was recently released along with an original book score. How did you get involved with this project and considering that it is a graphic novel, how did you approach the score?

They did a kickstarter to fund the book and as they got a very good response from the public, they added a score and a feature song as stretch goals.
When I’m just looking for interesting work on kickstarter I never really go to the book section. This project was featured on the main kickstarter page and it was incredible Norse art, so I got curious. I noticed the music stretch goals and sent an email directly to the producers with pieces I did in the past which sounded like orchestral Norse epic music.

For this project, I approached the score mostly like a movie, but I struggled a bit at first as to what form it would take. The stretch goal was set for a 20 min score but I figured that if I wanted to create a dramatic arc with the music it would need to be longer and to be somewhat made in a linear fashion. Since it’s a book and there is no synch points as to tell the readers how the music follows the story, I needed to find a good approach. So our solution was to create tracks named after specific pages that cover a range of pages. Telling the readers where they start without telling too much as to where it ends.

I started scoring with roughly a one minute per page ratio in order to create space for the readers to be immersed in the story and the art. What was great with this approach is that you still maintain a linearity and a context but the reader adds much of his/her own interpretations to it, which helps create an evolving experience.

What was the hardest part when scoring the graphic novel? How much creative freedom did you have and what were the guidelines from the writers?

Apart from finding the pacing of the music it was pretty straightforward, having the storyline as a guide and the directions from Rasmus (the book producer). I had much freedom on how music would evolve. Rasmus commented along the way just to make sure I understood the direction and the story. There were places we had discussions about the intention of a scene, as often it is not what is on the pages or in the artwork that creates the story. For example the Wolf’s Lair scene was not about the Wolf but more about the progressing emotional states of the main character.

I still have few pages left, so no spoilers please. Did you have any specific idea of how you were going to present main protagonist in the novel using music?

At first, since the main protagonist is unknown to the readers or even unknown in part to his own self, I didn’t want to get too quick into his main theme. So I started setting the tone of his Wife’s abduction, his urge to find her and the overall world he’s living in.

I was looking at places to give hints of his personal mindset, his emotions, his rage. For example in Panic, you hear the first rage theme which is also reprised in Pyre. There was also an instrument that gave his emotional compass, which is the distorted flute that you hear in a lot of the tracks.

In the end of Ambush you understand where he stands and you have a glimpse that something deeper is at stake for him, then I knew it was the best place to expose his main theme.

This theme returns at the end of Wolf’s Lair as well.

It is a personal story, following one guy, so a lot of it is played from his perspective.

The whole illustrated book is inspired by Norse mythology. How did you choose your instruments? How many of the traditional Scandinavian instruments did you use in your score?

The direction of the producer was a modern approach without sounding like Lord of the Rings or such.

It is a personal story, following one guy, so a lot of it is played from his perspective. I was looking for Scandinavian instruments to include. One, which was key for the score, was the Bullroarer, called a Brummer in Scandinavia. It’s an ancient instrument used as a communication device. I used it to set part of the tone of the Jotnar Tribe.

We crafted a lot of variations of Bullroarers. They make a windy hollow bass sound that modulate in the air. It’s very interesting. You can hear it in cues like Trap and Duel” and at the end of I need Alcohol.

As far as Jotnars I also used lots of long whispering vocals, trying to find a way to express their culture in a more visceral way. I thought that the closer to the beating heart the better it was for them.

When choosing instrumentation as I also thought of artists I worked with in the past, so I called on numerous collaborators to create the specific textures of the score: Youri Raymond who is the lead singer of the metal band Unhuman who gave the voices of the Jotnar choir in Trap and Duel.

Alexis Charrette who I asked to interpret the whispering mute boy in old Norse in Walking in Circles and Pyre. Eanan Patterson which was key to get that nordic fiddles feeling in I need Alcohol. Iohann M. Miller who is the score mixer but also played didgeridoo in Forest. And my wife, Sonia Loyer who did Freyja haunting vocal in Wolf’s Lair.

I noticed there is no dedicated Freya’s theme. Is there are reason for that?

There is one, but played as an indirect theme of her. On the second part of Panic you get that peaceful theme on the piano, harp and strings. I want her theme to be played like a ghost, nothing direct, just glimpse of the effects she has on him. That is also why in Wolf’s Lair you get her voice getting intertwined with the main character’s theme. Like a calling. 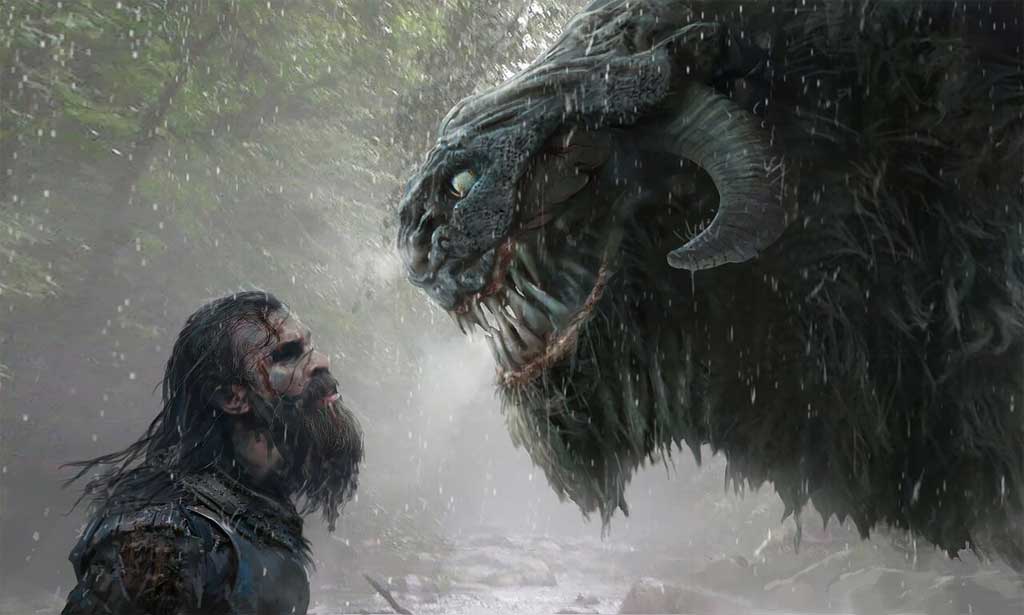 Song “The Call” also features a singer Delhia De France. Can you tell us more about the collaboration process and how you composed the song?

It was a great process and to an extent a proof of concept for me as to how the technology has opened the doors to long distance collaborations. Delhia is living in Germany and we started composing the song together. I was composing the music bed and we were figuring out together the direction and the structure.

Communications was all done over Skype and Trello for project management and files sharing. To give you an idea, the final vocals were recorded by Delhia on the road close to the California desert, it’s amazing how music can be created nowadays.

One key point was to find the point of view of the song, to create a way to express the overall story in one piece.

We thought that the story’s core was Freya’s calling all along, helping him through the memory of her so he could let go and grow out of this rage. It has a very broad meaning, and Delhia did a marvelous job with the lyrics making sure that it tell this story but also that it could be relevant out of the context of the project.

What do you think was the major difference between scoring a book and making trailer music?

That is an interesting question, the major difference for me is that you have much more time and a bigger canvas to create the setting, themes, story arc etc… This really changes the way you are composing, as you are not selling a story in two minutes but you try to help people get immersed into this world. Also when doing trailer music you start from your own concept(s) as Trailer houses rarely ask for custom cues.

Do you have any hints or tips for composers wanting to score a graphic novel?

Like in a film, put yourself in the shoes of the audience that are reading it for the first time. See if things you do transport you into the storyline. Don’t be too concerned as to what pace people will read it at, let the music accompany the readers in the adventure.

More about the book on iTunes and Amazon.
More info about the movie being turned into a feature film: http://www.hollywoodreporter.com/heat-vision/maze-runner-director-tackle-norse-817596