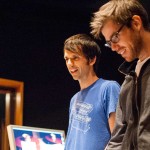 Trifon: I’m a life long guitarist, synth-nerd, and sparkling water connoisseur. I have a knack for unique musical sound design and memorable melodies. Together Brian White and I compose and produce music for video games, trailers, film, and TV.

White: What Trifon said, except swap the sparkling water with Scotch whisky.

Trifon: I collect a lot of instruments and fx, but I particularly like weird pedals and cheap rack mount fx units. Recently I’ve been enjoying my Zoom 9030 for it’s lo fi sound, unique ring mod, and it’s terrible yet wonderful distortions. Also, I really enjoy my Roland RE-201 Space Echo, it has an unbelievable amount of character. In the box, I’m running Logic X with NI Komplete, Soundtoys plugins, Sinevibes plugins and a ton of custom sample libraries.

White: It depends on the project. I like to use hardware and live instruments as much as I can. If we’re working entirely in the box for fast recall, I’ll use a lot of Nebula programs — especially the reverbs and saturation processors, that’s as close to the hardware sound that I have found. We’ll also use stuff on the UAD platform. No matter where it starts, everything we do ends up in Pro Tools for final editing and mixing.

Massive Chalice looks like a wonderful project to be a part of. How did you end up working on the project and how did you approach the score for the game?

Trifon: Massive Chalice was an awesome project to be a part of. We had worked with Double Fine in the past on Dropchord, so they asked us to do a pitch for Massive Chalice and we ended up getting the gig! Massive Chalice is a fantasy turn based strategy game that takes place over hundreds of years and many generations of warriors. We wanted the music to capture the passing of time, while at the same time avoiding the traditional fantasy music tropes that you would expect to hear in a Lord Of The Rings style score.

What was the brief for your contributions to Halo 2 Anniversary? Can you share some insights of your process for this project?

Trifon: We were fortunate to have the oppportunity to co-produce the soundtrack for Halo 2 Anniversary along with Paul Lipson of 343 Studios/Microsoft. Halo is such an iconic franchise that millions of people love. Our top priority was to stay true to the spirit of the original score that Marty O’ Donnell and Michael Salvatori did ten years ago. We wanted to improve on the sound quality of the original and update some of the sounds, but mainly preserve the essence which makes the original Halo 2 soundtrack so iconic.

White: The original game shipped on the first generation Xbox, the idea with the Halo 2 Anniversary remaster was to update the player experience to something that would really shine on the Xbox One platform. From a music standpoint, that meant breaking down all the assets, adapting and re-recording every minute of music and mixing that in surround. So it’s all the great stuff from the original score, refreshed for an up-to-date high fidelity experience.

You have quite a portfolio featuring everything from top AAA games to trailer music. If you could pick your favorite moment/project, which project was most memorable for you?

Trifon: It’s impossible to just pick one favorite moment or project, but I would say working with Steve Vai and Misha Mansoor on Halo 2 Anniversary was definitely a high point! I would have to say my favorite project was Massive Chalice, because we had a lot of creative freedom to do something original and different with the score. I like to think that it sounds quite a bit different than any other fantasy game out there.

White: Anytime we get to work and stay at Skywalker Ranch. That place is unlike anywhere else in the world, and unless you are working on a project there it’s not somewhere anyone can just show up and check out, such an amazing experience.

What was your role in the Top Gear TV series?

Trifon: My electronic music project Trifonic licensed several songs to the show over the last few years. It was pretty cool to hear my tune Parks On Fire set to the backdrop of a Bugatti Veyron!

Trifon: Bring more than one extra guitar tuner to a Steve Vai guitar session! The guitar tech’s fancy strobe tuner wasn’t working well with Steve’s specific guitar for some reason. Fortunately we were able to use a tuner in Pro Tools working and everything worked out great.

Trifon: I highly suggest developing your own unique voice and program/record your own custom sounds. Everyone has access to the same tools, which can lead to homogenized sound among composers. The more custom sounds and tools you have the easier it is to carve your own distinctive path.

White: If you want to be successful as an artist, composer, producer, etc. spend time developing your soft skills in tandem with honing your craft. Making the sickest beat or ripping a shreddy guitar solo is great, but so is having keen business skills, being consistent, staying organized, and just being a pleasant and easy person to work with. So many would-be professionals ignore those aspects and let their ego get the best of them, which ultimately slows them down or worse, ends up cutting their career short before it can even get started.

In this interview, we talk to composer Brandon Roberts about his work on Unbroken: Path to Redemption - An unbelievable true story of Olympian and World War II hero Louis Zamperini. END_OF_DOCUMENT_TOKEN_TO_BE_REPLACED

In this interview, we talk to composer Kurt Oldman about his work on a SuperMansion series and also touch on his past work. END_OF_DOCUMENT_TOKEN_TO_BE_REPLACED

In this interview, we talk to Gaayatri Kaundinya about her work as a composer and singer on The Hundred Foot Journey, Jungle Book and Million Dollar Arm. END_OF_DOCUMENT_TOKEN_TO_BE_REPLACED