What if Chewbacca was on steroids? I can’t imagine it either, but Tonsturm did and they created a new sound effects library called Ferocious Creatures which came really close to what Chewbacca* would sound like if he was on steroids.

As the name suggests, this library is all about various creatures. When I listened to the sounds I was worried that we might get another typical creatures sounds but Tonsturm took a bit of a different approach. Let’s find out.

Ferocious creatures features 311 multi take audio files which were recorded with the great Sanken CO-100K microphone that goes up to 100 kHz, Sennheiser MKH 8040 / 30, delivered at 192 kHz and 24 bits. Inside the pack you will find different type of creatures from small to big in various categories. Categories range from squealing, breathing, clicking, slobbery to gibberish voicing, demons and of course big and nasty roars.

Tonsturm brought in professional death metal singers to provide the voice along with Olof Johnsson, a professional voice artist that worked on Peter Jackson’s “The Hobbit: The Battle of Five Armies”.

In terms of content you surely get a lot of variety for the price. The price for the full version is $159 US which in my opinion sounds about right. It is not too expensive nor too cheap, based on the content.

Boom library was quite known for their Creatures library (review and interview here) and I cannot go without comparing it to the Tonsturm library.

Firstly, both libraries are great and worth having if you have extra cash laying around. The main difference is that Ferocious creatures sound and feel like they are more in your face. The sounds are louder and fuller in my opinion. It is also worth noting that Ferocious creatures will most likely find it way in more FPS (first person shooter) games and/or in film for close battles just because it really feels this way. Strictly my opinion.

Overall both libraries do the same thing but very differently, and for that, you have to give props to both companies even though in terms of market they are competitors. In terms of quality, both fell into same category: Pro sound quality!

Ferocious creatures have a well grounded metadata where each file is fairly descriptive and you shouldn’t have any issues finding them in your dedicated software being Soundminer, Basehead or similar. A nice touch is also the microphone information. 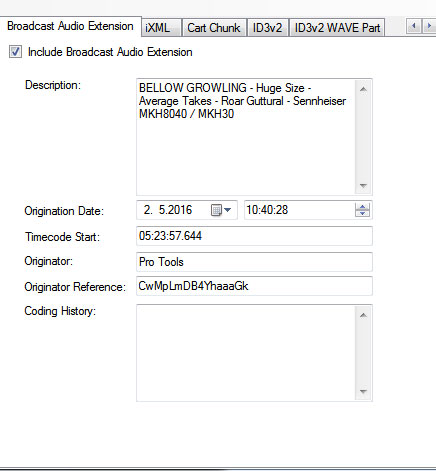 In the following example, as always, I tried using sounds as they are but in the end I just couldn’t help myself so I added a bit of a reverb and a Blue Cat’s Chorus. The latter is free and if you care about your sound, you should really check it out because it can really beef up your sound without sounding too artificial. I also did a minor time stretching and pitch shifting just because I wanted to. This can be heard right at the beginning of the video.

Ferocious Creatures, like other Tonsturm products, is a fantastic sound effects library. It has a great variety of sounds, fantastic quality and fair price to go along with.