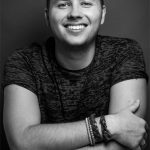 Hi Jasha, thank you for taking time and doing this interview. Let’s start by introducing yourself and telling us a little bit about your background in music?

Thank you for having me! Music has always been prevalent in my life. I grew up with my grandparents owning an opera house, Cinnabar Theater, in my hometown of Petaluma, CA. At 5 years old I appeared in Madame Butterfly and from there continued for quite a few years singing and acting in operas and musicals. During this time I began to take notice of the piano player offstage and started to take lessons. I studied classical piano for 15+ years as well as playing trombone in the local school and university bands. It was during these years I began to realize I had a love for composition, particularly when applied with film and tv.

The music of Planet Earth II is quite remarkable. How did you get involved with the series?

At the time I worked at Bleeding Fingers Music in Santa Monica and the BBC had approached Hans and the company about pitching for the series. Both Jacob Shea and I scored a few scenes to reflect the cinematic approach we would take to the series and they fortunately really loved our approach. I don’t think I had ever been so overwhelmingly excited to be creatively involved in such a project in my life.

The score was composed both by you and Jacob Shea. What would you say was the most challenging part of making the score?

I would say it was just simply the pressure to create a sonic palate that could hold up to the stunning imagery that was put in front of us. These extraordinary shots of our planet were our canvas and we wanted to create a sound that was cohesive, that was emotionally impactful and that was celebratory of our planet, across the 250+ minutes of music. We both had such respect for the original series and the work of George Fenton, and we just aimed to write music for this new series in a way that would hopefully resonate with the audience.

Can we get a little bit of the insight of your creative process while you worked on Planet Earth II?

As an episode would come in, Jacob and I would sit in the studio together and watch it down. We very naturally reacted to different scenes which allowed us to split up the work quite easily. From there we would establish a certain sound palette for that episode. Grasslands featured a lot of bell tones, while an episode like Deserts was very sparse and metallic in its approach. In addition to this we wanted to blend natural sounds, like the rustling of grass, or sounds of wind, with the sounds of an orchestra. And with our studios right next door to each other, it allowed Jacob and I to continuously feed off of one another. We’d share certain sounds and fx and melodic material – anything that would help create cohesion and best serve the scene. Composing can often be a very solitude job, so it was a real joy to collaborate with Jacob and support one another on this adventure.

How did you end up working at Remote Control Productions under Hans Zimmer?

Back in 2009 I was living in Petaluma, CA and going to Sonoma State University. I was a gymnastics coach at the time, and I just happened to be coaching a child whose parents had worked for Hans Zimmer fifteen years prior. They graciously provided an introduction and so I took the leap and moved to LA at the end of my second year in college. I started out with a five week internship before being hired as a studio assistant. For about two years I did various studio work, including orchestrating, technical assisting, and a bit of additional music for Lorne Balfe. I also served as music arranger for the 84th Academy Awards, as well as keyboard/synthesizer player in the event’s orchestra. Following the Academy Awards, Hans brought me on as an additional writer for Dark Knight Rises and from there I continued with Hans for a few years writing on various other films.

While you were at the RCP you also worked on popular movie titles such as Dark Knight Rises, Sherlock Holmes, Man of Steel and others. What would you say was the best part of working at RCP and what was the most difficult part?

The best part about being at RCP was the opportunity to sit in on meetings with Hans and watch the way he worked and collaborated with directors, musicians, and fellow composers. He is just such an incredible story teller and really encourages you to push the limits on how you can score a film. It’s an invaluable experience that I feel incredibly fortunate to have gone through. The most difficult part is of course the extreme hours required by the job. It’s an intense lifestyle to endure, but the experience and exposure to the industry you gain from it is indispensable.

You also worked on recently released Diana: In Her Own Words. How did you get involved with the documentary?

I had worked with Tom Jennings, the director, on another documentary just the year before titled, Challenger Disaster: Lost Tapes. What makes his documentaries so very unique and interesting is the way they are assembled using only archive footage and news clippings to tell these stories; and with the case of Diana: In Her Own Words, it is narrated entirely by Diana herself. With this in mind, Diana’s voice was the lead, and the music was meant to sit beneath her and help guide the viewer on the emotional journey she endured. This documentary was such an intimate portrayal of her life that I never wanted the music to get too big. Diana was always very quiet and purposeful, though she was surrounded by chaos and struggle, so I wanted to reflect that through a constant, yet restrained rumbling echo on piano. It’s a very moving documentary, and I feel honored to have been asked by Tom Jennings to be a part of it.

My main sequencer is Cubase and I run my core samples off of a Vienna Ensemble machine. Being a piano player, a certain type of weighted keyboard is important to me so I use the Kawai VPC1. For me, Spitfire libraries are my go-to for strings, percussion, and unique instruments, for they offer such a wide selection of sounds that can be easily manipulated. For the rest of the orchestra I use Cinebrass and the Berlin woodwinds.

The highlight has most certainly been scoring Planet Earth II. From the sheer diversity of music that we got to create, to the freedom to really explore interesting ways to score these incredible animals, it created such a fulfilling experience. The incredible BBC team, which were so open to collaborating and sharing their experiences while filming, and our amazing music team at Bleeding Fingers Music with Jacob Shea, it really was an unforgettable project to be a part of.

I had teamed up again with Hans Zimmer and Jacob Shea to work on Blue Planet II for the BBC. We also have been busy putting together ‘Planet Earth II: Live in Concert’ which will be touring in the coming year. I also have a few other projects in the works that I can’t say much about yet, but stay tuned!

Write, write, and write! Every day you sit down and write something, even if it’s only 10 seconds long, you’ll learn something new or come up with a different idea of how to achieve an answer. I know I do everyday. Try to sit in with other composers and watch the way they work; you can gain tremendous insight and learn ways to apply that to your own writing and style. Film composing is a very long career path, and as long as you can realize that, be willing to be an assistant for a few years, learn the technical side of the job, how to interact with clients, and be constantly writing, opportunities will come your way, you just have to stick with it. Persistence is key!

In this interview, we talk to composer Brandon Roberts about his work on Unbroken: Path to Redemption - An unbelievable true story of Olympian and World War II hero Louis Zamperini. END_OF_DOCUMENT_TOKEN_TO_BE_REPLACED

In this interview, we talk to composer Kurt Oldman about his work on a SuperMansion series and also touch on his past work. END_OF_DOCUMENT_TOKEN_TO_BE_REPLACED

In this interview, we talk to Gaayatri Kaundinya about her work as a composer and singer on The Hundred Foot Journey, Jungle Book and Million Dollar Arm. END_OF_DOCUMENT_TOKEN_TO_BE_REPLACED