Since the Game of Thrones main titles has popularized the cello more and more sample developers (Embertone, CineSamples, Spitfire, ect.) have been trying to capture the essence of this beautiful end expressive tenor string instrument. Harmonic Subtones have recently introduced to the market yet another spectacular solo cello virtual instrument with true legato and 16 play-styles. As a cello player I tend to be overly critical towards solo strings sample libraries, but I have to say, that I have been pleasantly surprised by the Emotional cello and I was inspired by the moment I played the first notes into my DAW.

It took four long years and sampling of various instruments for the Harmonic Subtones, a Munich based developer team, to produce this unique virtual cello. The 5,37 GB instrument packs multiple articulations, some of which are truly unique to this sample libary, with 4 round robins on the long articulations and up to 8 on the shorter articulations. When I was scrolling and improvising through all the articulations I really liked the playability of the instruments. This is truly one of those sample libraries, which are so well crafted and scripted, that they just work out of the box and give you instant great results even without going under the hood and tweaking the settings.

The Emotional Cello was recorded in the Mastermix Studio, Unterföhring/Germany and was mic’ed in a wood-paneled room with high ceilings and highest possible wall distance. Microphone recordings were performed intentionally close using two Neumann models KM184 and U47, preserving a discreet portion of the room’s excellent acoustics. The overall sound of the instrument is thus very warm and with tasteful “woody” acoustics which makes adding your own tail reverb extremely easy. 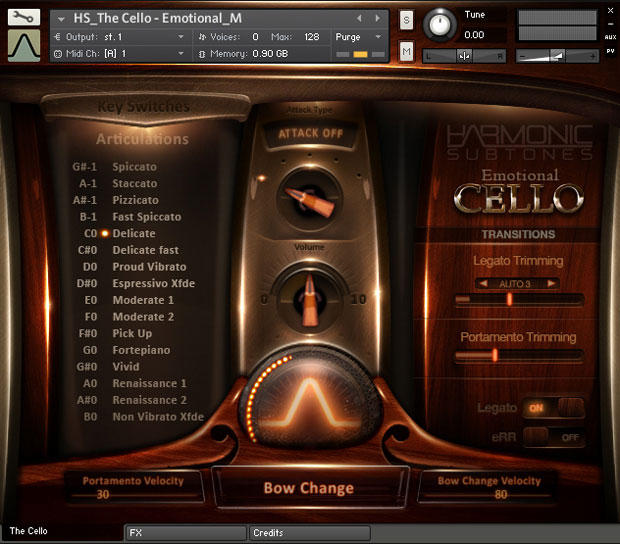 In the realm of the short art I found the fast spiccato extremely useful, for the “over the strings” arpeggios which we often find in cello literature. Overall you will not be disappointed with the shorter articulations at all. The dynamic levels are nicely captured. The attack of the samples ranges from soft to very harsh or the higher velocities and is very responsive to improvisatory playing, thus you will spent very little time tweaking your recorded midi data.

But where the Emotional cello really excels is in the longer articulations. You will find some well though out articulations such as the two renaissance playing styles, that are great for early music mockups, or the “pick up” articulations that features a medium speed up bow stroke. But my favorite out of them all is the proud vibrato articulations. The articulation immediately it brought me back to my cello study years, when I played Faure’s Elegie for cello and piano. This piece needs an expressive yet quite wide vibrato in its first few bars. With this inspiration I wrote a short piece with only using the proud vibrato articulation. While listening to the piece, bear in mind, that 90% of the cello was played in live. I only altered a few velocities to trigger the legato portamento. 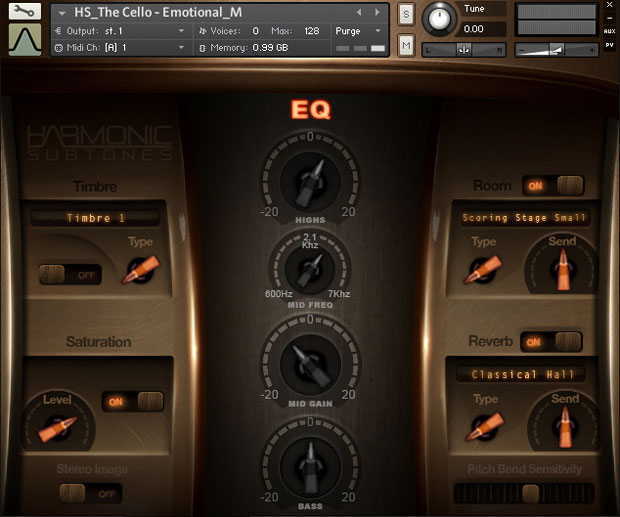 The instrument also features a bow changes on the long articulations, which can be triggered using a special key switch, but is sometimes triggered on its own since of the smart scripting involved.

In the other patches you will also find less used, but unique articulations and the vast amount of content of this library will keep you occupied for hours. I am a lot of time will have to pass for this library to play itself out.

The garphic interface is very pleasant to look at and the warm colors suit the instrument tone nicely. You will find an indicator for the articulation you are currently using, knobs for setting the attack rate, volume, portamento volume and a dynamics knobs, that gets brighter as you go louder. In the main page of the GUI you will also be able to turn the legato and round robins on or off, tweak the legato timing (the auto 1,2 and 3 work just fine) and portamento timing. In the FX tab we have an EQ, scoring stage, timber, convolution reverb and saturation settings.

The Emotional cello costs 259€ (aprox. 187£ or 291$) which is quite high for a single solo string instrument, but the amount of content, playability and all the hard work, that was put into the making of this library make the instrument worth every penny. So if you have a need for a solo cello library and have some money to spend, you will not regret the buy.

This is the best solo cello library I have had a chance to get my hands on and it will definitely stay in my main orchestral template for a long long time. The guys at Harmonic Subtones did a amazing job with this instrument.