A year ago Edward (footsteps library) surprised a SFX market with its unique instrument for sound design. Since then the Edward was mentioned quite a lot in various magazines as well as the audio spotlight for its unique capabilities. Now, the Edward makes a comeback with two new versions of the instrument (Extended and Ultimate editions). I took them for a spin and was quite surprised by it. Read more about it below.

The original version featured over 25000 samples which you can image is a fair number of footstep samples. Of course you didn’t have to manually stroll through each since you had a Kontakt instrument at hand to do that for you. The original offered a nice set of functions to make your life a bit easier using the tool when working on a film but we will get to that in a bit.

The Ultimate version comes with over 48.000 samples at 24 bit and 48 KHz. The instrument loads all the samples at once which makes first time loading a tad too long but purges unused samples. That means your computer will only take RAM and CPU resources when you load a specific sample set.

Extended version on the other hand features around 35000 samples and takes the same behavior as the classic Edward with the difference that it uses a single patch in Kontakt. Classic uses multiple patches. Extended also has few sounds that Ultimate doesn’t have which is a shame.

The sound of Edward feels very authentic if I can call it like that. Tovusound used state of the art microphones to capture the sound as cleanly as possible. The samples were edited carefully and you can’t really hear any additional noise that could ruin the scene in post. To word it better, you won’t have to do much work after you have used the samples besides mixing in my opinion. In the example above you can hear the original sounds as they are. No mixing or post has been done.

The first thing you will notice using Ultimate or Extended version is the new interface which looks really great. As mentioned the single patch loads all samples at once but actually uses the ones of your choice. Classic version uses multi patches which means you always have to refer to Kontakts quick load (if you add the library there) function in order to find appropriate footwear. Not the case with the Ultimate and Extended since all are already on the front page of GUI. You just select footwear and surface and you are good to go. I should mention that not all footwear has the available surface attached to footwear. For instance, the boots don’t have water surface while the sneakers have.

The difference between Extended and Ultimate versions are also quite obvious. While both feature single patch, Extended version uses less samples and only has a one “deck” as Tovusound calls them. Decks are basically sound sources (footwear and surfaces). Ultimate features two decks where you can mix samples between each other. 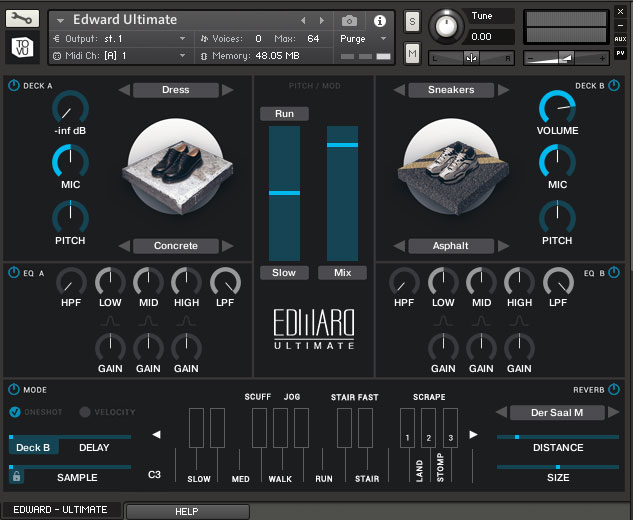 In my test footage in the first clip I used Ultimate with only “Deck A” using dress/business shoes and concrete as the surface. On top of that I added one of the custom impulse responses that Edward comes with (all versions). For the final touch I automated the volume to fake distance. You also have the ability to choose between two different microphones.

In the middle are two big sliders where one mixes the two decks, adds deck B to deck A or switches between the two decks using mod wheel. Latter is very handy when you have to sync two different surfaces on the screen. In all three examples I used the mix function. The other slider, which is controlled by a pitch wheel, dynamically controls the mix between the types of movement. You can choose which type of movement (walk, run, scuff and plenty of others) you want to mix between each other. Extremely handy for dynamic scenes but there is a down side if you are not that skilled using midi controller. Luckily all the keys have different types of movement mapped across the keyboard.

In the middle you also have an EQ for each of the decks if you need to tweak the sound even further. The last two options are the custom impulse responses where you can tweak the distance and size and of course choose the type of IR. The other option is the play mode. You can choose between the “One shot” and “Velocity” play mode. The latter plays depending on how hard you press the key on your keyboard but again quite tricky to get the movement sound just right. The “One shot” mode plays the samples to end (turned on by default) when the key is released but sometimes it is really hard to tell when that happens because the sample are very short to begin with.

Overall I am pretty pleased with the way Edward works in Kontakt. The Extended version is practically the same with the difference that it has only one deck and it has the attack and sustain envelope. Other than that it works pretty much as the Ultimate. 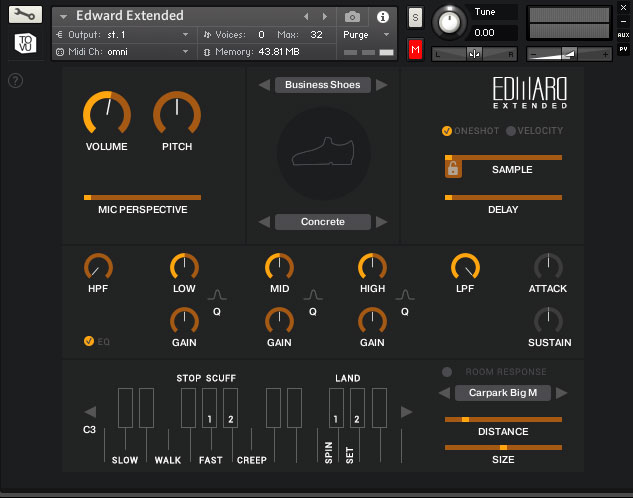 The Edward is a fantastic tool that makes your life a whole lot easier when it comes to adding footsteps to a film but it comes at a price ($399 or introductory price of $299) especially if you do not own full version of Kontakt. Having said that, I think it’s worth the price. It saves a lot of time and it is easy to use plus you do get a huge collection of footsteps. You can also consider the classic Edward which will cost you around $59 US or the Extended version which will set you back for around $99 bucks.

You can compare the different models here.

For more reviews please check out our review section