The old lady eDNA has never looked so cool. eDNA or Electronic DNA is the latest product from Spitfire Audio and we are lucky enough to review it. Please note that this is a humongous product and we will be only looking into a relatively small chunk of it named Earth. Now that we have cleared that up, let us have a look at what eDNA is and how you can put it to good use… 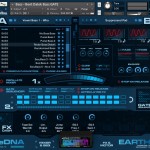 eDNA – Earth comes as a download only in a whopping 43 GB package (compressed rounds up to around 25 GB of samples). Like many libraries these days, Spitfire Audio offers a download manager with which to download this release (not Continuata). It worked pretty well (although it is still in the beta stages) and eDNA was ready to use in a day with a standard (by today’s standards) internet connection (1 MB optic cable).

As I have stated in the introduction, eDNA is filled with a lot of content ranging mostly from basses, keys, pads and other synthetic and organic sounds. There are 1001 patches (each constructed out of two sounds) in this library and that is only a small chunk of what is possible as you also have the option to construct your own patches using sounds that are not included in the library patch selection menu. Therefore you also get additional samples to play with and that is a big plus for this library.

Spitfire Audio has broken down patches into various categories and named them “cartridges“. Now, this is just a fancy or rather retro name for their categories. Which cartridge you’re using is also displayed at the bottom of the graphical interface.

Just to get an idea of categories:

And that is just the artist collection (main category) of the library. I guarantee you that you will not go through this library in a single day. There is just so much content in eDNA.

The rest of the categories are mostly bonus ones in which you can load up two of the pre-existing samples into the graphic interface. The latter will be explained in the GUI part of this review.

Overall, the content gets full marks. But does that mean there is more quantity then quality?

I am happy to say no. eDNA sounds great with few exceptions. These exceptions are mostly the extended notes which, like with most Kontakt libraries, sound a bit hollow and not really that authentic. Strictly a personal opinion here, I will explain it in a moment.

Other than that I think that EARTH sounds great. The sound (minus extended notes) is rich and full.

Nowadays you see a lot of developers making this kind of hybrid library (mixed with real instruments). It raises an interesting question – whether you’re better off using synthesis software rather than a sampler such as Kontakt. I am bringing this up because in the end you will have to decide what to buy and what not.

Kontakt definitely has its advantages and Spitfire makes it easy for you to find the right sound – that niche sound you have been looking for – even with Kontakt. It is up to you to decide. I’m personally all for sampling vintage synths and making them available to the audience but I also like to make my own sounds if and when I can. Even more so when the particular patch/sound is already quite popular. What are your thoughts on this? Comment below and let us know. 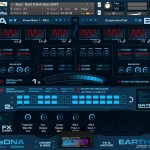 At first glance, eDNA – Earth looks a bit frightening as it throws everything at you as soon as you load a patch. I would divide the main interface into five sections and those would be “Sample display“, “Routing options“, “Sample options“, “Oscillator mixer and Step sequencer” and “FX dashboard“. That is only the first layer and it looks pretty decent. Since there is also a construction kit to speak of the first part “Sample display” changes to “Sample selection” where you choose one of the pre-existing sounds.

The oscillator mixer is a nice twist as it shifts between the mentioned two samples. Step sequencer works great too. I also enjoyed the “stop on release” option as I have not seen it in many Kontakt libraries. This function turns off the effect once the note is released; pretty cool for ambient patches. All of the effects are there and are divided into “Bay A” or “Bay B” targeting just one of the two sounds. To navigate to these effects you have to click “FX and Motors“. You can watch the video Spitfire released on all effects and other possibilities here.

The thing I don’t like in eDNA – Earth are the sliders which sometimes blend with some of the artistic lines. At first I had an issue because I didn’t know if it was a slider or just a line on a picture. The second problem I find is similar to the first one. The pictures are also sliders and they should change when I drag my mouse upwards or downward but that sometimes results in frustration. At times it felt really glitchy and wasn’t responsive, namely the cutoff and resonance pictures.

The speed of the oscillator rate is a bit counter intuitive in my opinion. 16x rate would be fast oscillation and 128x rate would make it a slow oscillation and the same goes for the step sequencer. Maybe I am nitpicking here but I have to admit that I found those things a bit annoying and I wouldn`t say they are of any major issue though it can be if you are quickly annoyed.

eDNA – Earth is £129GBP or 165€ plus VAT so it is not on the cheaper side. I personally think that the price is ok for the shear amount of content you get. Before using construction kits, you will most definitely spend lots of time with the premade patches. The quality is, again, great and I can’t really say much but to give the full marks on that.

Earth is a cool product with lots of content to play with and it sounds great. I had some issues with its graphic interface but then again if you read any of my previous reviews you know that I might get picky with GUI as I believe that the whole point of GUI is to make it user friendly with the right amount of controls to tweak. I know it’s not something you can achieve in a day but it’s something that developers should strive for. Having said that, I don’t think the GUI of eDNA is particularly bad, just that it has a couple of flaws. I was annoyed with them but they may not annoy you.

If you are looking for fresh sounds then this library might be for you as it certainly brings something new to your doorstep. 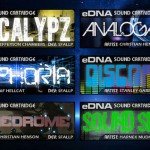 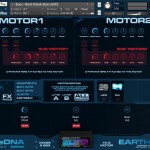 Read our interview with Spitfire Audio. Don`t forget to rate the product yourself if you bought it in the “Reader rating” tab below!

Alternatives
Here are some alternatives for you to explore