Wide Blue Sounds entered the market last year with their flagship software synthesizer instrument for Kontakt called the Orbit, which introduced us the Orbit synthesis engine. Based on this same engine comes their new product Eclipse. Let’s have a look inside of this thing.

Eclipse is a synthesizer that focuses on the darker side of the moon so to speak, providing you with aggressive stuttering chopped rhythms, ominous pulses, interesting fx and dark flowing atmospheres, textures and pads. Everything has a very cinematic feel to them but can just as well be used in other context when looking for a dark or gritty sound.

Eclipse doesn’t produce sound by oscillators, but with pre-recorded sound material. 101 individual sound files, totalling at 210 minutes at 500MB, so we’re not talking about a big library size-wise, but thanks to the Engine and the number of sound sources, the variations in the created sounds come in many with 250 ready presets to get you started.

Speaking of the Engine, as the Eclipse is based on the same engine as Orbit, it is therefore nearly identical to Orbit when it comes to functionality with some improvements however, but the main difference here is the darker and more aggressive nature of the sounds.

How does it work?

I don’t personally have any experience with the Orbit, so I am new to the engine that Eclipse is built on, but if you have worked with it in the past, you should feel right at home. The engine consists of three parts, the main Engine page, the Effects and the Sequencer.

This is where the magic happens. The way it works is that you can have up to four sound sources playing in their own respective channel in sequence, changing or cross-fading between each other to create one playable sound. The 101 different sound sources are divided into three categories, Simple, Complex and Asylum. So you choose one sound source per channel and play a note on your keyboard to hear the resulting combination. As the category names suggest, you can create anything from minimalistic soundscapes to hectic aggressive rhythms. 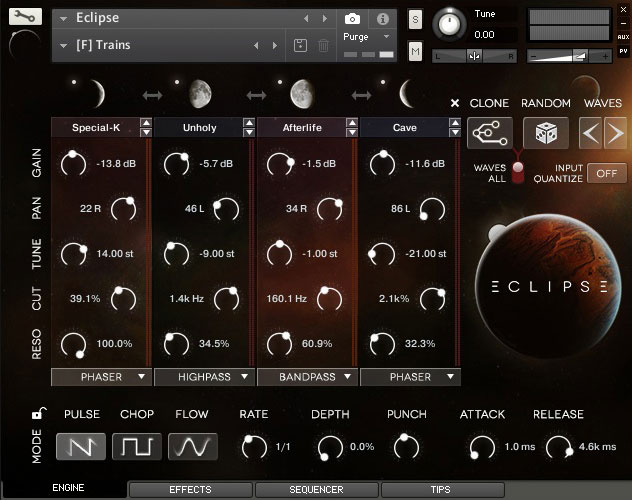 The method for how the sounds change from one to another is chosen from three modes: Pulse, Chop and Flow. You can create for example a rhythmic aggressive loop using the Chop mode, where each sound source distinctly plays one after another in a choppy manner, or a more flowing ambient texture using the Flow mode, where the sound sources cross-fade between each other in a very flowing manner. Or you can just modify one of the ready presets and transform it into something completely opposite. The ready presets come in four categories: Chop, Flow, FX and Pulse.

Each channel holding an individual sound source provides you with such controls as gain, panning, tuning, filter and resonance. You can also adjust the rate at which the sound sources switch between each other to match any rhythms in your project. Set the rate to very low and using the Flow mode and plenty of reverb, you can create some nice long evolving ambient textures that will have plenty of variation throughout.

Everything is naturally synced to DAW tempo as well. There is also a randomizer function to play around with which can be set to randomly change either both the sound sources and channel parameters or just the sound sources. Needless to say this button is a source of instant inspiration.

The second page in the instrument is for the built-in effects that are applied globally to the sound you created on the Engine page. There is the scream amplifier, distortion, chorus/flanger/phaser, delay, a warmth processor that adds warmth by reducing higher frequencies and a nice convolution reverb that comes with very nicely spacious impulses. While the effects are nothing too special except for the cool impulses, they still quickly provide valuable extra tweaking possibilities for your created sounds. 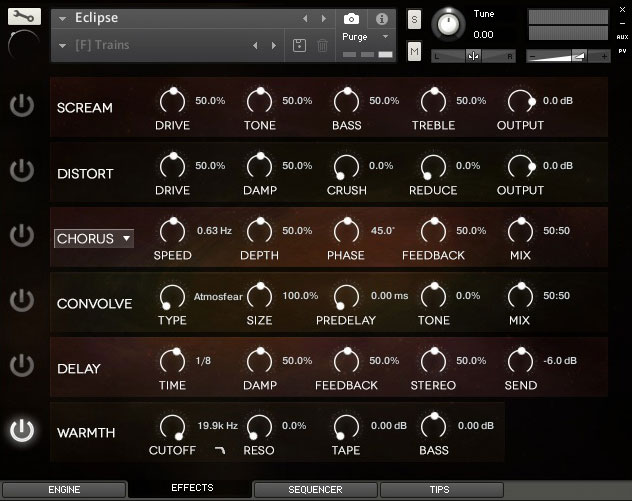 You actually get four sequencers, one for each sound source. These sequencers are highly modifiable, you can draw your own patterns, choose from ready-made ones, modify the created pattern in all sorts of ways, reverse it, move it around, quantize etc. You can even select the direction the sequencer plays or have it loop back and forth. So, lots of tweaking possibilities again to vary your sound.

Wide Blue Sounds also provided some handy key switches for enabling or disabling the channels and sequencers as well as a special stutter gate trigger. 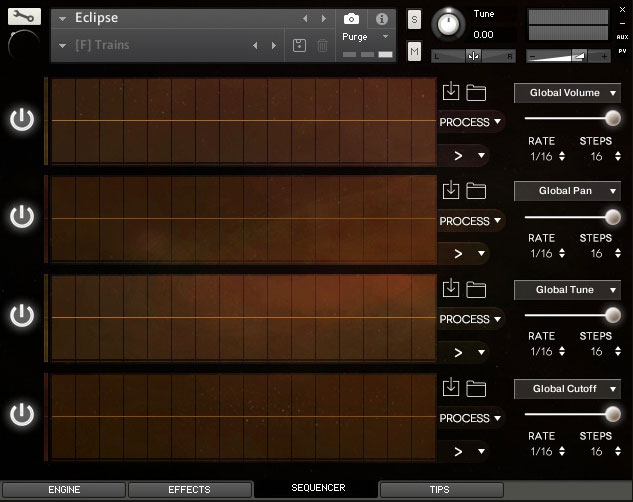 The Sound and Conclusion

The most important part, how does it sound? Well after playing with Eclipse for a while and going through all the presets, my top most thought was “This will definitely find it’s way into my future cues.”. The reason being simple, the instrument is good for so many purposes, it can be a gnarly synth bass line or a very thin repeating suspenseful pulse or a slowly transforming dark ambient soundscape with intriguing little sounds here and there echoing in the middle of the evolving sound bed or it can be a huge tearing sub-bass hit.

By far for me the high points were the Flow sounds and the Pulses. Both make great underscore elements in any cue needing a darker touch. Although I did find some lighter sounds in there as well, so you aren’t totally restricted to very dark moods. Eclipse can be mysterious or even melancholic at times. Absolutely beautiful electronic drones and atmospheres and occasionally a little organic sounding stuff too. They seem to market Eclipse as the more Epic sounding synth compared to the Orbit and while this probably is true, as I said, I feel I can use this in a much more subtle way too.

The price tag isn’t too bad on this, especially while on introductory sale at $119 ($149 regular). For anyone trying to make up their minds on which one to get, Eclipse or Orbit, I would say Orbit has a ton more variety in moods and is capable of more lighter sounds and dreamy soundscapes while also having a darker side to it. Eclipse takes that darker side and expands on it with aggressiveness and heavier sounds, but also has a lot of less aggressive, more underscorish dark tones. There is some melancholic and even serene ambient content as well too but the focus is on the dark. There is also a sale on the bundle package at the time of the writing, so for $248 ($348 regular) you would be getting both synths. Not too shabby.

For anyone already owning Orbit the decision might be tough. It comes down to do you like the Orbit Engine and do you need more dark and edgier sounds to put through it? If yes, I’m sure you won’t be disappointed at Eclipse.