Dream Audio Tools has quite a few varied virtual instruments to offer. I got hands-on with their “Platinum Bundle For Native Instruments’ Kontakt” which, for $200, offers up a good portion of their catalogue. This means I have a lot to get through and instead of reviewing it as a single entity, I decided the break the review up into sections depending on which instrument was represented – guitars/bass, keys or percussion/effects. 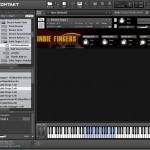 My first impressions of the guitars were positive, I admit to having a little bias against virtual guitar instruments since I am a guitarist myself and expect nothing but perfection so this came as a pleasant surprise. The loops are recorded clean, without effects and are good except for a few rare exceptions where some artifacts were present. The acoustic guitar sounds full and warm while the electric guitar is clear so if you have amp simulation software such as Guitar Rig then you can take it pretty far.

I also found that the loops layered very well together so you could pick 2 different patches, set them both to receive from all midi inputs (“omni” in Kontakt) and the two would play together making a new pattern which, if you’re lucky, still sounds natural and expands the range of options available to you since, let’s face it, melodic loops never offer a lot of scope unless you get creative with them.

The 4 different products in this range share a similar interface with some slight modifications to reflect what instrument is being played. They offer 4 effect knobs depending on what you would need for the instrument. The electric guitars have reverb, chorus, delay and drive, volume 3 gives us the “degrade” knob instead of a chorus one. The basses change depending on which volume (1, 2, 3 or 4) and the effects are always relevant to what you’d want.

The GUI is clean, functional and easy to understand. Nothing wrong here unless you are looking for more in-depth control, but at $20 each you can’t ask for too much. 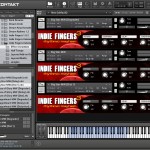 Each $20 offering comes with its own bunch of patches, usually clearly organised into multis, well labelled loops which explain the key and how the patch works and if there are any other things such as alternative preset GUI choices (just a way to save time really). The effects are basic but functional. I would recommend using your own 3rd party plugins for effects if you want a wealthier set of choices (Guitar Rig worked nicely).

However, this is the bit where I have to keep it real and point out a few issues I found with Indie Fingers. For example, some recordings in volume 4 (“acoustic edition”) had a few harsh sounds (some notes are louder than others) that stood out and made the recording unusable (since the same harsh sound would be repeated every 8 beats it became obvious it was a loop). This is only the case for a few somewhat random examples in some of the patches I tried and by no means representative of the whole. Still, it is a shame they are there.

Also, the loops don’t lead very well from one to the next, there’s a noticeable stop at the end where the ring from the previous notes should continue but doesn’t. For context, every loop is a single riff recorded twice in a row, so this could have been solved by scripting, making the end loop back to the middle of the recording so the ring is still there, thus ridding us of the obvious loop stutter effect. Another missed opportunity to make this product outstanding.

I know I can get quite preachy when it comes to virtual guitars – I have yet to find one I would even consider using in anything I can be proud of because I have played the actual instrument for more than 10 years myself and tend to spot inconsistencies that break the illusion of reality for me. I’m sure many violinists and cellists etc. would feel the same way when hearing virtual symphonic instruments, things to which I am oblivious. I use virtual orchestras all the time.

So either take it as a strength of this review or as a weakness but my final opinion is the following – If you manage to cover the issues with the loop transitions using effects, then I could see Indie Fingers being used quite effectively. Otherwise I’m not sure they’re worth using (in my production at least).

At $20 each ($80 total) or as part of the platinum bundle (meaning they’d effectively cost around $15 each), you can’t complain about the price. For that reason you can’t expect the world of these virtual instruments/loops and so, although I levelled some harsh words at them, overall I think they’re worth the $20 you would pay for them if you want something to fill a gap in your arsenal.