Today we will be looking at a new version of the Voxpat – a real-time monster, creature and robotic voice designer created by Digital Brain Insturments. In essence Voxpat is very similar to Dehumaniser review with a few differences. Let’s take a look at well these two compare and which should you check out.

Voxpat is very much like Dehumaniser, based on Max MSP and produces similar results to Dehumaniser. It turns your voice into a creature, monster or a robotic voice. Voxpat comes with a few pre-designed patches as well as a few samples to work with. The patches are a nice start before you go under the hood and start turning knobs. Samples and presets were also provided by some of the best sound designers in the industry (Frederic Devanlay, Stephan Schütze, Kate Finan and Russell Gorsky).

Once you run and set up Voxpat you are immediately presented with all the features it has to offer. The main difference between Dehumaniser and Voxpat is that Voxpat uses 2 microphone inputs and various sample players, depending on the effect you might want to use. It also has 4 pre-designed effects (Fear, Beast, Roar and a Burst) + modules that instantly turns your voice into a creature. These four effects don’t have any knobs to tweak which is a shame, but then again that is the point of pre-designed effects. It does provide a solid idea of what you can do with Voxpat though.

The rest of the effects follow in a straight line and enable you to tweak the sound to your liking. We will get into that in a bit. All effects also have one thing in common, and that is the mixer on which they are placed. You can select the morphing which is represented by letters S and a number corresponding to a morphing side (1 or 2). You can switch between those two in a Voice morphing slider. All effects also have panning, solo and mute buttons. Lastly you have the dry slider to mix with the effected sound.

Overall the process of creating monster sounds is pretty straightforward without being overwhelmed with knobs and sliders. Dehumaniser took a different approach and has two modes with which you can play with (Simple and Advanced mode). Voxpat, on the other hand, as mentioned above, has everything on one screen. What you might prefer is up to you but I am liking both.

I have to say that Voxpat isn’t the prettiest thing in the world, and I have to give Dehumaniser props for making Dehumaniser look wonderful. That said, at the end of the day, beauty isn’t that important, as that’s just eye-candy. Workflow is the key and Voxpat certainly makes your life a lot easier with its straightforward approach. One thing I really like are the numbers above each effect which open up additional settings for the desired effect. You can access them by clicking on them or by tapping one of the numbers on your keyboard (1 – 0).

Since we are talking about the effects, let’s compare Dehumaniser and Voxpat even further. In the effects world both offer practically the same effects and have similar effect on sound. But let’s start at the beginning.

The Dehumaniser uses 1 noise effect with additional options such a delay, EQ and sensitivity mode. Voxpat enables EQ for the effect once you click the name of the effect at the bottom of the effect slider.

This effect uses procedural audio to generate mammal sounds depending on the selected parameters. This mammal sound is used as the carrier signal for convolution processing and will be modulated by the input signal.

In both tools you have to be careful with this effect not to overdo it as it quickly turns into something that doesn’t resemble a mammal at all. Again, Dehumaniser also have an additional EQ on the effect itself while Voxpat turns it on if you click on the name of the effect.

Voxpat also offers a “Clone” effect which, as the name suggests, clones the original effect. You can also set the delay time to give the sound even more detail. 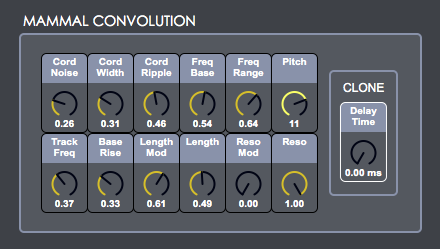 This effect works like a harmonizer. It uses 6 pitch-shifting sections that can go up to +/- 24 semitones or two octaves. I have to say that I had a great time with this effect and it is fairly easy to create interesting sounds. Each pitch section has a delay, volume and a “sense” option. Those are pretty self explanatory so I will not describe them for you. Dehumaniser uses the same effect. 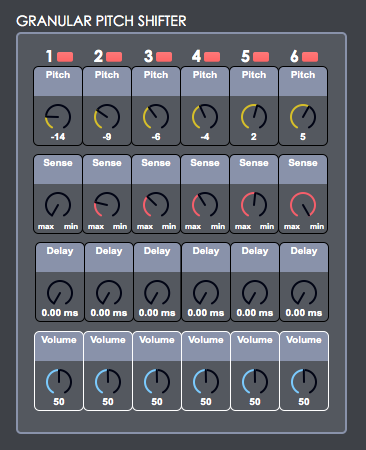 Both effects use 4 audio sources in which you load a folder or single sounds. Once you load a folder, all the sounds in that folder will be available in the dropdown menu. You can pre-listen to a loaded sound if you click “PRE” button. Each sample player has play mode, loop mode, pitch and a speed at which it plays the sound. A great thing about it is also the sample envelope which is activated by clicking on the waveform. This is very handy when you want to mix/fade all four sounds. Effect is similar to cross synthesis effect in Dehumaniser.

Both effects also offer morphing between four samples and are triggered depending on the selected input method. While sample convolution is triggered only via inputs, you can choose which input is triggering sample player (Audio In/Out).

Overall both effects work pretty much like in the Dehumaniser with the difference that Voxpat uses 4 sound sources. 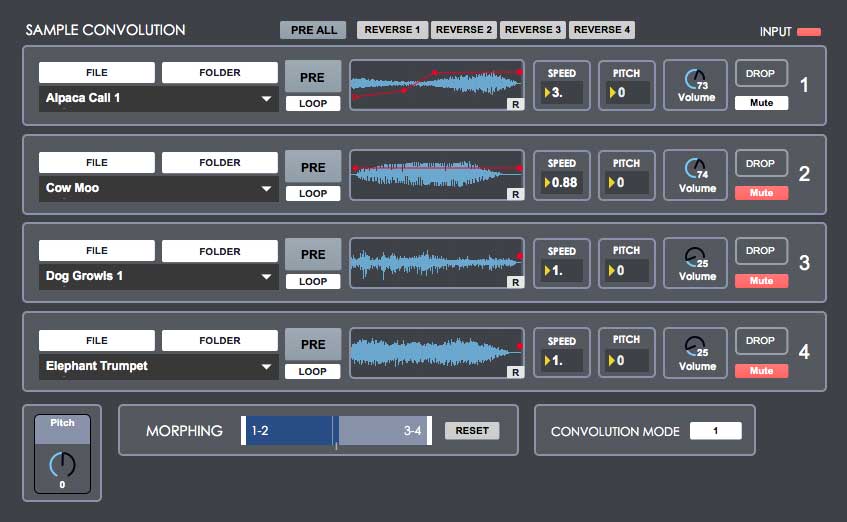 Spectra and Delay pitch (DPITCH) are both pitch-shifting effects that work quite differently. Spectra uses two modes called “inner” and “outer” band which pitches the selected frequency. The inner band will pitch shift only the selected area (marked by you) while the outer will shift everything that is not selected.

Same goes for the amplitude range. This effect is pretty handy when you want to create some ghost-like creatures or when you want to add special detail to the low end. One thing to note is that you shouldn’t really go overboard with pitching above two octaves. Anything above that will not sound that that good, but I guess that’s the case with most pitch shifting effects.

DPITCH creates delay loops of the incoming audio signal. Each loop introduces the same amount of pitch-shifting in comparison with the previous loop, like a never-ending pitch shifting effect. Again, be aware not to go overboard with the pitch shifting.

Ring modulation is perhaps my least favorite effect in Voxpat. While there isn’t much to say as to what this effect does, the output is somewhat underwhelming in my opinion. The low end modulation works ok but the higher frequency modulation produces constant tone and doesn’t seem to do much modulation at all or maybe I don’t know how to use it properly. Often I found myself turning off this effect.

It is not really an effect but you can load up to two plugins which could be a VST instrument, an effect which you can morph between each other. Plugins are also placed before the master effect in which you can add two additional VST effects. Dehumaniser also uses the same effect with the almost the same functionality.

Like most instruments or effects, Voxpat isn’t without its issues. One thing that is counter-intuitive, at least for me, is the saving audio part. Often I’d lose takes because I didn’t click the “Save” button first and then recorded the sound. Another thing is the output quality: You can export sound depending on your sound card settings inside the Windows or Mac. In order to export a higher quality, you would have to go into your sound card settings and change it there.

In the effect knobs, I also haven’t found a way to revert it to its default value. Again, this is a minor issue but one would expect to have an effect reset button (I noticed reset button on few effect but that button resets the whole effect). Using mouse to tweak the knobs is also a bit annoying to get the right value. . Edit: You can edit the value by hovering over the value and type in the number. It is a bit hidden from the if you do not try it.

Apart from those minor issues I thing Voxpat worked without any hiccups.

There are at least two things which I would like to mention before concluding this review. In the main window you will see the “Delays” and “Input depending” buttons which, as their name suggests, delay the effects or trigger depending on the input. You also have the a “midi matrix” if you would like to associate your midi controller with certain effect. I haven’t noticed the routing matrix in Voxpat which is present in the Dehumaniser.

Another thing to note is the great documentation Voxpat comes with: You should really check it out (even before purchase) to get familiar with its capabilities. 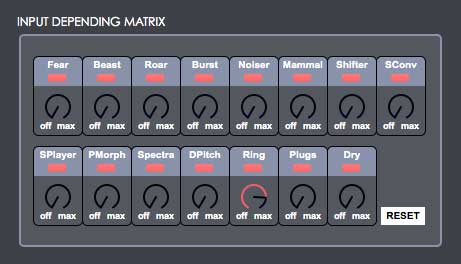 Voxpat, very much like Dehumaniser, is a fantastic tool that saves a lot of time in creature sound design. The price ($159 US or $119, on sale until April 30th) is justifiable, and to be honest it is not that expensive considering the work it saves you. You must know that neither Voxpat or Dehumaniser will completely do the work for you but it will get you close.

Voxpat really shines when you are using microphone inputs as a sound source and has plenty of effects with fair amount of tweakability to get the desired sound. On top of that, it is also very fun to play with.