Pictures by Gianfilippo De Rossi
© 2013 Diego Stocco and DTS, Inc. – All Rights Reserved
———————————————-
“Sound Magician” is a video series I produced for surround sound company DTS, Inc. On each episode I explored some sound design techniques and tools that I developed, contextualized as a story or setting.

Below you can see each video and read more information about the miking/processing techniques and the tools I used. Enjoy!

Imagine a large spaceship hovering over the city, suddenly a menacing signal resonates in the air, announcing the beginning of the invasion. 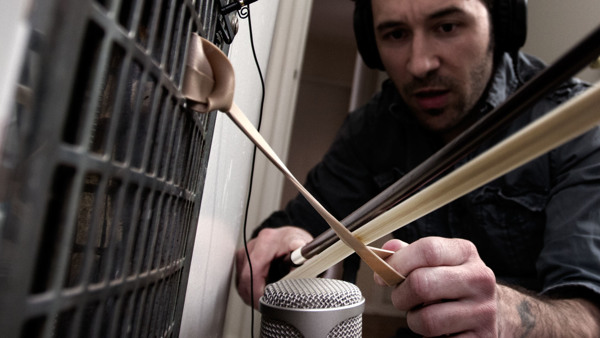 This is how I created the basic tone you hear when the piece starts, by bowing a rubber band with a double bass bow. The tension of the rubber band determined the pitch. Then, I processed the sound with customized reverbs to make it sound larger. 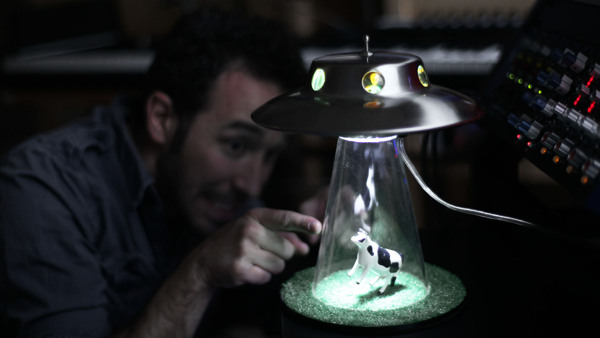 A clear shot of an actual alien abduction! The truth about aliens is finally unveiled. ;)

Imagine being immersed in the ocean, surrounded by whales singing to each other. The tool I’m rubbing against the cover of the BBQ grill is a bamboo skewer with a bouncing ball pinned on top. It makes metals and similar types of surfaces “sing”. 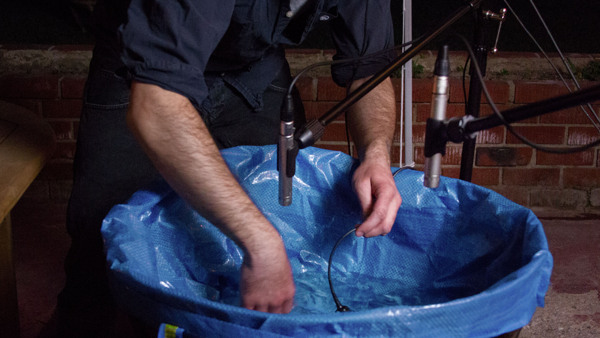 Here I was recording the sources to create the water sound. I used two Røde NT5 and a hydrophone. I processed the sound with EQs and resonators to create the impression of a larger mass of water and to create a suspended mood. 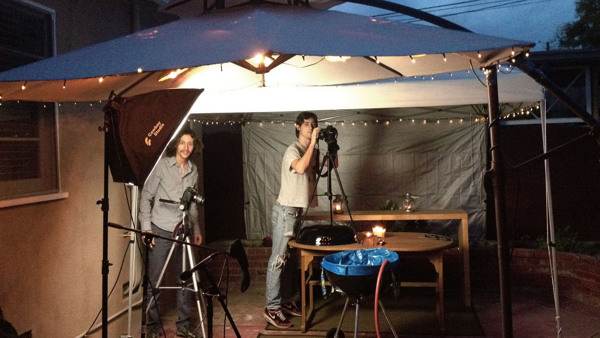 A huge thanks goes to Luca Severi and Gianfilippo de Rossi for the fantastic camera and lighting work throughout the whole series!

This one is a little funny. :)
If toys could call each other on the phone, what would they say to each other?

For the musical background I used a musical box with writable paper strips, notes can be punched in and melody/harmonies can be created. Although this video is pretty basic, the challenge was the capture those tiny sounds/noise in high fidelity.

For this video I got inspired by looking at the flying machines that Leonardo Da Vinci designed. I assembled a number of objects to simulate a large flying device in motion; the mechanism of a autopiano, a wooden tripod, a wind wand for the propeller sound and finally a flag to create the motion of the wings.

Imagine being in the forest, some monkeys up in the trees observing what’s going on. Suddenly they hear a noise and start to get nervous, they signal to each other the presence of a larger animal, and finally a beast jumps out of the bushes to attack!

The idea here was to create a series of animal noises without actually using any pre-recorded animal noise. Instead, I used a tree played with a double bass bow and some potato chips for the steps.

If you have watched some of my previous works like “Music from a Tree”, “Music from Nature” and “Duet for Leaves and Turntable” you know I have a big passion for creating music and sounds with trees. 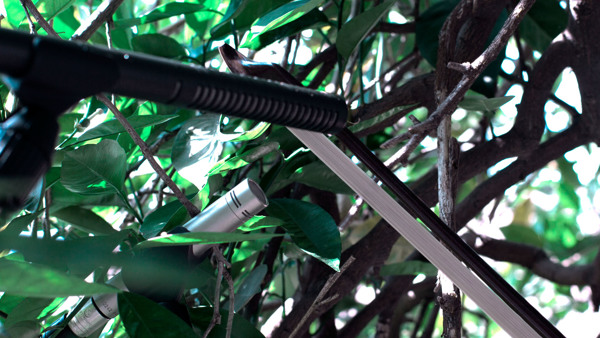 Here you can see the miking technique for recording the bowed sounds from the tree. I also have a microphone placed about 4 feet away. I like to record this way so that I can have multiple perspectives available.

Imagine a solar storm hitting our planet, all electronic devices will be affected and power down making crazy sounds…well, at least that’s what happens when you see this kind of scene in a movie!

For this project I used guitar and bass pickups to record electric noises and tones produced by circuits.

DISCLAIMER: Unless you have solid experience and are fully aware of the risks, DO NOT tamper with powered electronic circuits, you might get electrocuted and/or damage your devices and electric system. 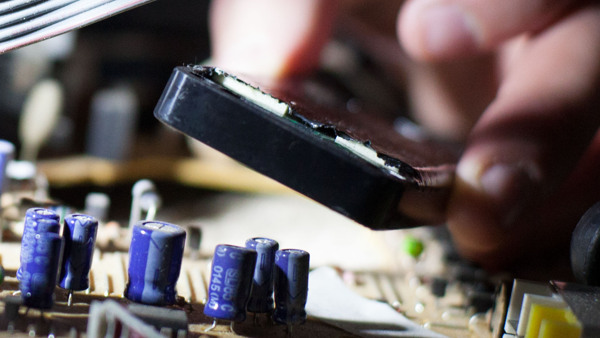 Here’s a detail of the bass pickup over the circuit board. 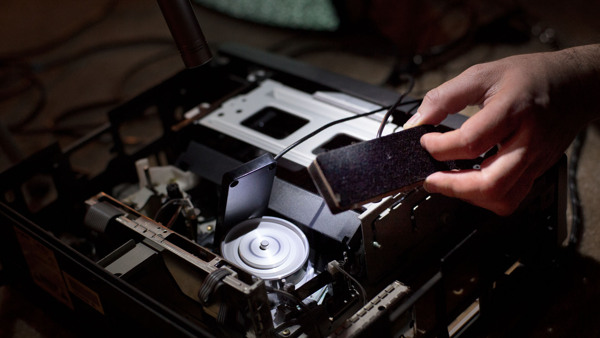 Both pickups recording the tones and noises of a VHS recorder.

This one is an experiment in controlled randomness. I wanted to hear what happens when a lot of bouncing balls are unloaded over 4 vertical pianos. That was the random part. The controlled part was when I took all the recordings and aligned them in a more organized way.

This one is probably my favorite because of it’s simplicity. Make sure you watch the video BEFORE reading the description below the following picture. ;) 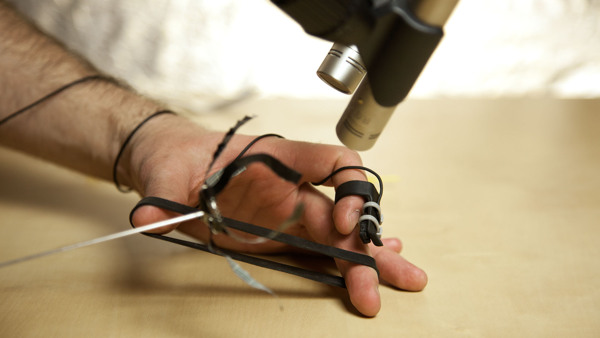 This is how the tool I used to create the basic tone of the hummingbird. It’s a milk frother with 4 strips of duct tape attached to it. The speed of the rotation and the tension of the rubber band determined the pitch of the “humming”. Then, I processed the sound to emulate the sense of distance, Doppler effect, frequency spectrum changes and dampening. To add realism I added ambience sound, but as you can notice in the video, I’m bringing it down when I show the tool, to expose the “hummingbird” sound and make the trick more obvious.

This is an extra video that I created while I was producing this series.

Usually I make myself a regular coffee in the morning…but not this time. ;)
The idea was to capture the noises of coffee in high definition and bigger in size, but then, the sound of the sugar packet reminded me of a shaker so I got inspired to make the whole experience more rhythmic and somehow musical. 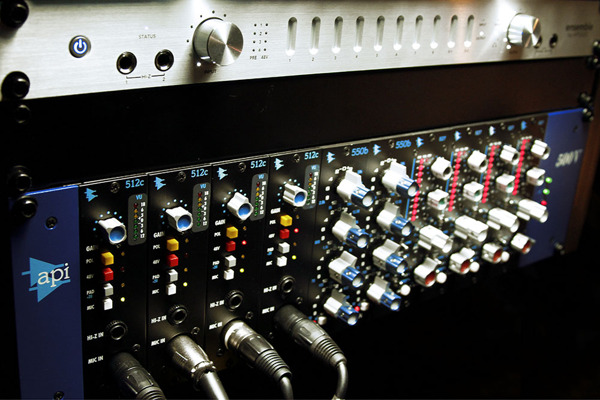 For those of you into technical details, this is the gear I used to record.

API 512c preamps, 550b EQs, 527 Compressors, and Apogee Ensemble as the converter.
Microphones: Røde NT5, NT2-A, plus some custom built ones I made myself.