Search
Home
Featured
Disclamer: This article went through many iterations before it was posted. The reason for many changes, were some of the bugs in the Dehumaniser II, specifically its patch system. These have been fixed with the release of 1.2 patch. I have noted where the fix was applied. Also to note: In some cases I use the word module, node and/or effect – all of these names mean the same in the Dehumaniser II.

It’s been a while since I used Dehumaniser for a project or for fun. Now the second version (I’m counting commercial releases) has arrived and I was fortunate enough to have been provided an evaluation copy. The full review will be featured sometime next week but I wanted to give you my first impressions. At this moment I still haven’t finished the demo but it will be ready next week. I’ll keep this short.

The second installment is completely different beast from what we know from the original Dehumaniser and from their competitor Voxpat. This time around Krotos created a fully functional VST and boy I am glad they finally decided to do that. No more clunky rewiring, just plug and play.

What’s new in D2, besides being a VST, is its modular system. If you are familiar with Native Instruments Reaktor, then you should feel right at home. All of the effects you are used to (if you own Dehumaniser) are here plus two new. The new additions are ring modulator and flanger/chorus effect. Both effects are ok but there is nothing ground breaking there in terms of the effects itself. Both are great for making sci-fi and/or robotic voices. You can always add your own to the effects chain if you feel like. Granted, it will be after all of the other effects in Dehumaniser II. 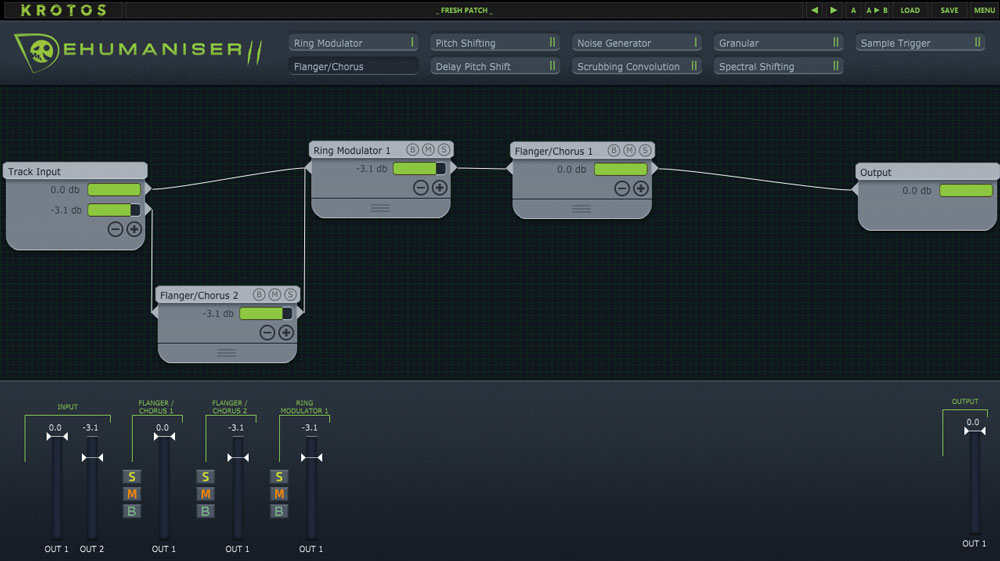 The new modular system works great. You can drag and drop effects or click on them to bring them to the wiring area. There you can connect these effects via virtual wires, just like you would do it in Reaktor. I found that the more complex patches you make the harder it is to see the wires. I would suggest some kind of highlighting system when you click the desired wire. You can connect the effects via two methods. Parallel, where there are two or more effects connected simultaneously to the output or serial, where you connect one effect to the other and then to the output. You can also create combinations between the serial and parallel connections.

There is also a new so called “Drawer” tab in each of the modules. This is used to create macro controls and if you wish, you can automate them inside your DAW. Pretty cool feature. There are three knobs that can be switched between each other using the right mouse button.

The big difference between previous versions and this one is how advanced options are displayed. In the previous version, each time you clicked on the effect a new window appeared. This time around all of the node’s parameters will be show in the bottom tab so you will have a quick overview of all parameters each node has to offer. Each node also has the option of many outputs, which means you can wire it simultaneously to the main output and to other effects inside Dehumaniser II. You have to create each output by clicking on the plus sign. I had to get used to that because, instinctively I just tried dragging wires and expecting it would create itself. 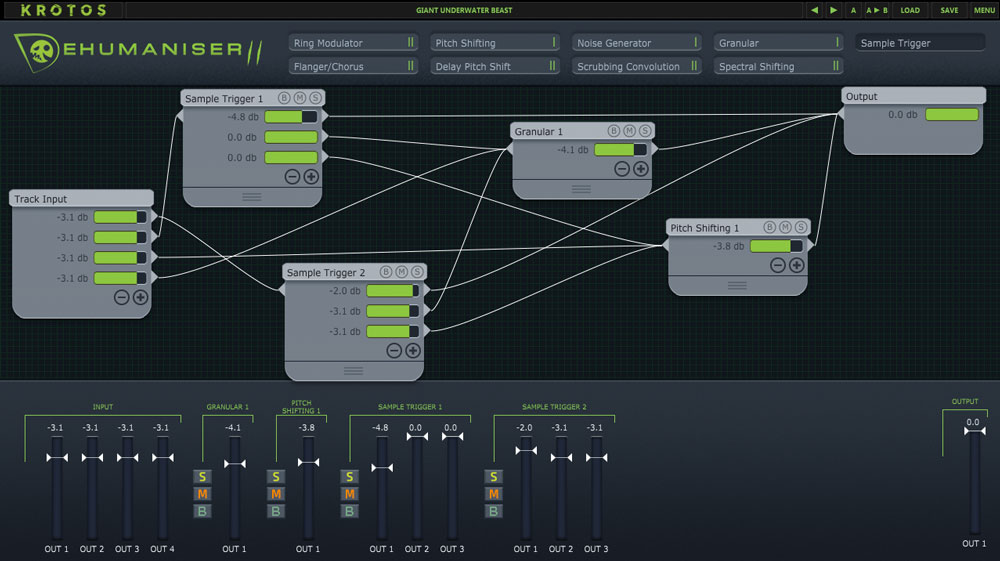 At the moment and I don’t know if that is going to change, Dehumaniser II supports 1 signal input and multiple outputs on the effects. That means you can only use one sound source (mic or a sound clip). You can bypass that by creating multiple instances of D2. Surprisingly, Dehumaniser II is somewhat CPU friendly but like with all other CPU friendly VSTs, you must not create too many instances.

The not so much fun stuff happened when I tried to use its presets system. In the first run it worked fine but then it started crashing due to reasons unknown. I got in touch with support and they have provided me with a patch. Support was great and very responsive. EDIT: This has been fixed in the 1.2 patch.

Presets are ok but I think those were more designed to help you out once you start making your own presets. The thing with the presets is, that they are very dependent on the sound source. One preset might sound good with one sound source while the other might not. There is no universal preset that would make everything sound good. And that is a good thing. It leaves more room to explore. 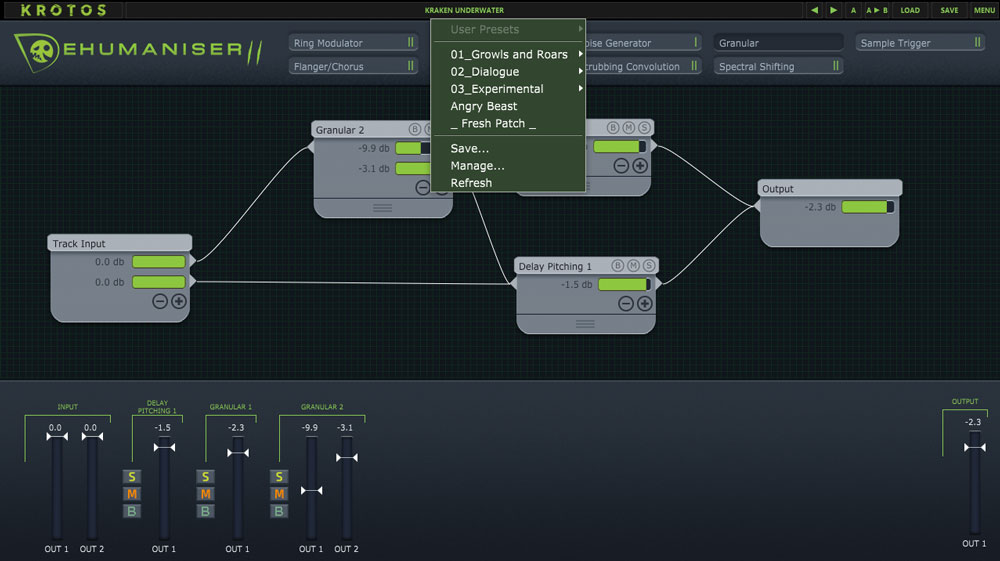 There were 33 new presets added which, again, in my opinion are ok. The cool new feature is the stereo spread in the main output node. I think it’s fantastic but like with all knobs in Dehumaniser II a bit too harsh when turning the knob. Small changes in stereo spread make a big difference to the sound. Another cool feature is the new modulation shape wheel in the Flanger/Chorus effect. I don’t know how else to call it to be honest. Here you can choose the shape of how the sound is modulated. You can choose between six shapes. You can also choose the number of voices (up to 10) in the same effect. There were also some CPU improvements, preset fixes (how you access them) and crash fixes.

In the end, I will say this. As with the previous Dehumaniser, the second installment is great and you have to give credit where credits are due for making it a VST. But, you have to understand that it is just a tool. It won’t create the hard part for you. It will make some things easier but not all. I can say that frustration with Dehumaniser II can become rather common because one small change in one parameter can lead from a good sounding monster sound to a terrible one and vice versa. It is one of those tools that are really easy to get into but to really master it; it will take some time and patience.