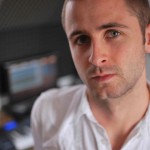 1. Tell us a little about yourself and what you do for a living?
I’m a full-time composer, living and working in London. I’ve been writing for film, TV and theatre for about 5 years or so – I worked before that as a songwriter and producer for pop, which made the transition quite smooth. I’d like to think I took some of that mentality from the pop industry with me, and experience as a producer certainly helped when it came to mock-ups and recording live players.

2. What is your niche or speciality, that makes you stand out from rest of the audio professionals?
I would never claim to be an expert or have a speciality in anything – all my life I seem to have been a bit of a jack of all trades. But, ironically, I feel that played into my hands when ending up in my current occupation, as being a modern film composer requires you to wear so many different hats and apply yourself to such a wide skillset.

If I had to say anything made me stand out, it would be my approach to the business and dealing with the people within it. I was lucky enough to have been brought up by a father who was not only an extremely successful businessman, but an endlessly charming people-person who built his living around his ability to inspire trust in people. About 1% of that (combined with a tireless and borderline obsessive work ethic) rubbed off on me, which has allowed me to rely on the fact that, in most cases, I can get people onside given ten minutes in the same room as them. I take full advantage of this, and not a week goes by that I’m not out and about in the city networking in one form or another.

3. Can you give us a brief summary of the equipment you use regularly?
Working off a Macbook Pro networked with a PC slave, in a room filled with guitars, pianos and the occasional ethnic string instrument.

4. What are your go-to plug-ins and software? (virtual instruments, audio processing etc.)
I run Logic as my DAW, and recently my go-to libraries have been what I find to be an absolutely killer combination of LA Scoring Strings and Spitfire Albion. Up until this year I was running entirely Vienna Symphonic for my orchestral stuff, but became less and less inspired by the samples themselves. I used them originally as I tend to orchestrate everything fully and am not a big fan at all of ensemble patches – VSL lent itself perfectly to that, but what LASS provides with divisi sections, combined with the beautiful recordings at AIR of the English Session Orchestras inspiring players, I made the move away. I also recently picked up Omnisphere, which is just mind-blowingly good and I feel I’ve barely scratched the surface with it.

In terms of plugins, the go-to that I swear by and have done for years is iZotope’s Ozone – a wonderful mastering tool that can polish up my mixes beautifully and has served me very well. Will stick with that until I can afford to hire Bob Clearmountain.

6. What is your usual process for creating audio content for games, films etc.?
In roughly this order:

7. Are there any particular secrets to your creativity?
Aside from the latter process mentioned; stepping away from the computer whenever possible. I begin my scores predominantly on paper now – composer Richard Bellis inspired this process at a talk of his I attended, where he likened working within a DAW to performing key-hole surgery, as opposed to working without these technological confines and opening yourself up to the freedom of a blank sheet of paper where anything is possible.

Admittedly, working on a score where the budget is not in place for solely live players at the recording stage means that some concessions need to be made when making the transition from manuscript to computer in order to play to the strengths of whatever sample libraries you have available. But I would rather downsize from an initial concept than limit myself from the outset.

I began working like this for that very reason, and for the reason that the majority of composers don’t appear to work like this anymore – I want to approach things differently, and allow for my own voice to come through.

8. Do you have any audio creation techniques that resulted in something interesting?
The first thing that comes to mind is that I have a bit of an obsession with shifting room sizes as a piece progresses. I’ve experimented with it many times before in terms of automation of reverb, but recently I worked with a brilliant and progressive Kazakh violinist named Aisha Orazbayeva on my last score, who had just released her latest album Outside. On it she performed a number of existing and original pieces, which were recorded across a range of different locations from anechoic chambers to underpasses. These were mixed together to create this organic, shifting space that is a psycho-acoustic delight. It’s transfixing, and I can see myself approaching a future score in the same way.

9. Any specific “lessons learned” on a project that you could share?
Actually yes, and I’m afraid it’s a potentially de-motivational one, so I’ll try and make up for it in the next question. Remember that nothing is set in stone until you’ve signed on the dotted line. Even then, you’re position has the potential to be in jeopardy. I have come out of spotting sessions and been a week into scoring when I’ve been informed that I’m no longer onboard and that the decision was made to go with another composer. I’ve been waiting for advances to be paid into my bank account when I’ve been informed that the primary investor has dropped out.

Having your wits about you and treating this business like a businessperson is an absolute necessity if you want to survive. Many make the transition from hobbyist to professional not anticipating this jump, but believe me it does happen. Legal disputes, payment issues and clients reneging on contractual obligations is an unfortunate reality of it, and you have to be prepared.

10. Any tips, hints or motivational speeches for the readers?
At the same talk by Richard Bellis that I referred to earlier (man, did I get mileage out of that one…) he said that in order to improve and keep progressing, your score has to always be better than the film. The second it’s not, you’re plateauing, and that’s where you’ll stay.

That advice stuck with me, and is something I’ve committed to make sure of for the rest of the my career. Always be better than the last thing you created. Even if I have the opportunity to score for a genius filmmaker like Wong Kar Wai or Alejandro Iñárritu, I will still endeavour to make sure that the score is better than the film.

Bit of a tall order.

In this interview, we talk to composer Brandon Roberts about his work on Unbroken: Path to Redemption - An unbelievable true story of Olympian and World War II hero Louis Zamperini. END_OF_DOCUMENT_TOKEN_TO_BE_REPLACED

In this interview, we talk to composer Kurt Oldman about his work on a SuperMansion series and also touch on his past work. END_OF_DOCUMENT_TOKEN_TO_BE_REPLACED

In this interview, we talk to Gaayatri Kaundinya about her work as a composer and singer on The Hundred Foot Journey, Jungle Book and Million Dollar Arm. END_OF_DOCUMENT_TOKEN_TO_BE_REPLACED