Today we will be reviewing the Soundbits SFX library called Cinematic hits & transitions. Let’s get straight into it.

Cinematic hits and transitions comes as a cca. 1 GB download-only product and it features some 200+ samples which would be ideal for anyone wanting to spice up trailer music or just enhance their videos. It’s marketed mostly toward film editors but sound designers and composers can benefit from the pack also.

The sounds are delivered in 92kHz, 24 Bit sample rate which is ideal for stretching the sounds further in post production. The quality is up to par with some of the bigger boys on the market and the only difference is the size of the content and some of the repetitive sounds included in the pack.

The sound of the Cinematic hits is really well done without any low end bleeds or too much hiss on the high end. The one complaint I have is that some sounds, especially the hits, sound alike. The low end particularly in some cases is the same. I personally don’t mind that but the developer could perhaps add more variety to the sound.

The transitions don’t suffer the same fate as the hits though. There are plenty of different sounds here to last you a long time. Combined with some of the post production techniques, it could last you even further. I have to mention that transitions are sometimes very subtle which is actually good since you won’t get that “in your face” sound that many developers go for these days.

Cinematic hits & transitions is a bit of an older sample library but it is still relevant to the market. The samples aren’t particularly edgy which is fine. As I have mentioned above – the market doesn’t have to be saturated with the same sound.

Price will also be a big factor when you are deciding. Cinematic hits & transitions will only cost you a fraction of a price from what the big boys offer. For the cca. $50 you will surely get a nice bundle of sounds.

I have attached the screens for how the metadata is implemented. First image shows the Hits metadata and second one the Transitions. 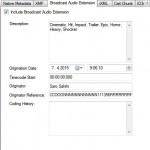 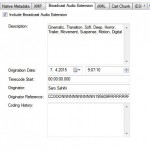 Cinematic hits & transitions is a great product that you should definitely check out. Great sounds, awesome quality and all for a price to make other libraries seem expensive; this is an “Awesome” library.