Today we will be looking at the Chris Hein Winds bundle by Best Service (volume 1 – 4) and see if it’s worth the price tag it carries. 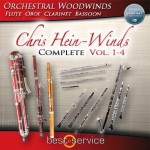 The Chris Hein Winds comes as a download or in a box and you’ll need Kontakt 5 or Kontakt 5 Player to run it. Although there is plenty of competition out there, this bundle brings, as the developer states, a “true solo legato” section of the woodwinds. Since this is a pretty huge (cca. 50 GB) bundle of solo instruments I will be focusing more on its strong points and then mention what I disliked when using the particular instrument. Before we proceed, let us have a look at what you will be getting with this bundle.

There are four instruments included in this bundle with its variations so for instance in volume 1 you will get the flutes, in volume 2 the clarinets and so on and so forth. Since the price of the bundle is pretty steep (though not in the market sense, but still pricey) you have the opportunity to buy each volume separately for around cca. 199 euros. This is a good thing if you prefer a particular instrument over the other. Eventually you will probably need all of them.

Here is a brief overview of the bundle.

Each of the mentioned libraries come with cca. thirteen articulations, up to 8 velocity layers, four dynamic modes and dynamic expression sustains. All of the mentioned instrument also feature a blank/clean instrument in which you can setup your own presets and key switches. More on that in the graphic interface part of the review.

As you can see you get a pretty hefty woodwinds section but the question is; how does it sound and how well does it play?

I have to say that I quite like the way CH Winds sounds. It’s soft when it needs to be and stronger when you play the low notes. It doesn’t feel like a faked sound and that is something I always give props to developers for. No, it feels elegant and smooth and, most importantly, authentic (as far as sample libraries go). Since I am not that skilled (and I am not ashamed to admit it) in composing with woodwinds, the statement above is purely on how I perceive, feel and hear its sound. When listening to a dry sound (effects turned off) you can hear some studio reverb but it’s nothing major in my opinion. There are also some other noises that you can hear, mostly mouth noises which, depending on how you look at it, can be a bit of an annoyance or it can bring some realism to your composition. I usually find them annoying as they tend to come up in the mix. 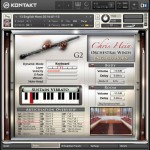 As much as I like the sound of Chris Hein Winds, I have to admit that I kind of dislike its interface mainly because I feel it is too cluttered. It feels like the developer tried to squeeze everything into four tabs on Kontakt. Now, don`t get me wrong – it does what its suppose to do and you have every single option available to tweak which some might like, but me personally, it feels a bit too much if there is such a thing. There is an upside though and it is exactly what I have mentioned before.

The four tabs, or should I say three tabs, since the first one is basically a minimalist view of the whole instrument, enable you to tweak different phrases and different effects. In tab two for instance, you get the whole overview of the set parameters such as articulations view, expression view, velocity view, body of the instrument and convolution reverb (which features its own impulse responses) plus a nice picture which shows you how an instrument is played in real life. The picture also shows you when you are crossing into the realm of the extended notes which I personally loved as it showed me a proper note range.

This brings me to tab three in which you can set your own articulation, not in sense to make one but use an existing one and map it the way you want it to be mapped. There are a couple of settings also to tweak the sound even further, for example to shape the transient, pan, noise, set the dynamic layer movement or blend the trills. Each solo instrument can also be turned into a polyphonic sound meaning playing more notes at the time. It is good to have that option but these instruments in this library are best played in legato, in my opinion. Which brings us to tab number three.

In tab three you can modify fader settings, pitchbend (good for legatos), number of voices (for the ensemble), curve of the dynamics and ADSR. All of the functions work as they should and you should have no problems understanding each of the mentioned ones. Tab three also features another tab called DSP – FX which as you might guess features all of your typical processing effects. 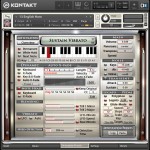 Tab four is the vibrato setting page. I played with it or, should I say, tried to play with it, but couldn`t really come up with anything useful. Again you have plenty of options here to tweak the sound or the way vibrato of the particular instrument sounds. The LFO which controls the vibrato can also be set to a different CC which is a nice feature and you have the option to turn on the Auto – Vibrato and select which of the parameters will be controlled. Once selected you can draw your own curve or shape which is more trial and error type of drawing especially if you don`t have a steady hand.

Here is my problem. By the time you get to tab four you sort of lose the interest in tweaking the sound. It is just too much in my opinion and the developer could easily make it more user friendly as the sound of each of the instrument is pretty great and well recorded and you really don`t need to tweak it that much.

It’s frightening when you first open the instrument. You are presented with tons of information which for some might even be redundant. This was not meant as a rant but more as a realistic view of what happens when you first open the instrument. Sure, some might like it and some might not but the reality is that especially if you are short on time and you need something done quick, the last thing you want is to be flooded with various information. What you might need is a distraction-free environment and CH Winds is the opposite when you open it.

Like all Kontakt instruments it is not hard to learn but the tweaking possibilities might keep you occupied for weeks if not further.

The whole bundle is pretty pricey and will cost you around 650 Euros which, compared to Berlin Woodwinds, is still almost a 100 Euros more (though BW has expansion packs which sum up to more than CH Winds). Each of the instruments volumes can be also purchased for around 199 Euros which is good if you need a particular instrument.

Chris Hein Winds is a good instrument bundle and it includes everything you need to create a realistic woodwinds section. The sound is extremely good but the cluttered GUI might keep you so busy that you forget how good it really is.

Chris Hein Winds (Best service) review
Chris Hein Winds is a good instrument bundle and it includes everything you need to create a realistic woodwinds section. The sound is extremely good but the cluttered GUI might keep you so busy that you forget how good it really is.