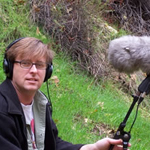 I am 50 years old, and do sound effects design and editing for film, TV, commercials and games- presently, I am the co-supervising sound editor / designer for the M/Night Shyamalan film AFTER EARTH. I have done sound effects for film for about 18 years as my full time work.

I am known for my sound design for films mostly, as well as for my sound effects recording of military subjects like weapons and explosions. As to what might make stand out – that’s a hard thing to answer personally. I think I have a special desire though to make my sound design sound as organic, and natural as possible. I also tend to not use sub-woofer effects as much as many of my fellow crafts people – though I try to use them as much as I can get away with.

In the studio, I mainly use AVID ProTools HD that is used for all of my editorial and studio sound design and mixing. For my field recordings, I use Sound Devices recorders mainly the SD744T but also use the Fostex FR2 and Zoom HR4. For microphones, I use many, ranging from Sennheiser MKH 416’s, the Sanken CSS5, Crown SASS and RODE NTG3 amongst others.

I use many of the AVID plugins such as their Channel Strip and Revibe plugins but I also use a wide variety of 3rd party plugins mainly Waves, McDsp, Sonnox and quite a few boutique plugins by Massey and Valhalla DSP (and a bunch of others).

I think deadlines are very important. It is easy to spend huge amounts of time experimenting with concepts for effects, but I find being pushed into tight deadlines to be very helpful to force creative solutions.

If possible, I prefer to record new content as much as possible. After that, I like to master the material, and then take into the “design” phase where plugins and mixing further shape the sounds that are applied to the project. Film based commercials and TV all have unique requirements so there is not really one work method that I find works in all of them so projects need a very heavy “DESIGN” approach, and others like the film Moneyball which I did with the brilliant Ron Bochar, a lovely sound designer / mixer / supervising sound editor who is a principal at C5 in New York City. Ron was the first mixer I worked with who really took Pro Tools mixes from temp mixes all the way into a final, and the things I learned from him in preserving work during version refinements shaped much of current methods and viewpoints in film sound.

A tough question for sure. Usually, I like to be able to think up a concept in my head and try to realize it. I find that tends to narrow choices in seeking a good solution to a sound design issue. I think its also very important to experiment with general concepts in designing the sort of physics that a sound might be required to fit into.

One of the more interesting creative adventures I had was in the film “The Fantastic Four” there was a space storm which had lots of meteors and such to design sounds for and in the process of creating those sounds, the re-recording mixer I worked with encouraged me to use an analog 2 track reel to reel which I used “rock and roll” scrubbing techniques to elongate and process things like cannon ball bys and tiger roars to create dome of the characteristic sounds for the sequence. It was very fun, and quite rewarding.

Every project is unique, so the lessons one takes away from each is sort specific but the thing that rarely seems to hurt concept wise, is trying to make very specific sounds for the significant action happening on screen. If more of a bed is required, its nice to able to use as little or as much is required without it affecting the foreground sounds.

My favorite quote for sound comes from Randy Thom, who has been a lovely influence and friend in my career. He says that “it’s great to be able to make mistakes when going through the period of creative discovery, but that you should try to have those things be as inexpensive as possible“. Randy is a titan to me and really has a special gift for getting to the essence of what a sound is supposed to do vs what it might be.