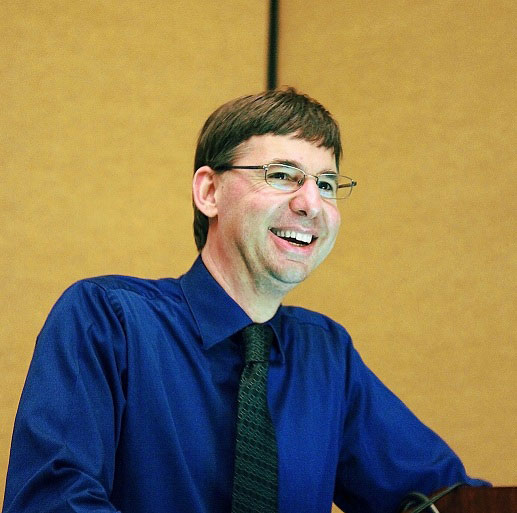 I wear a few hats, thought they all are directly related with sound and music for video games. I’m the founder of GameSoundCon, a conference on videogame music and sound design—we’re about to have our 8th conference this October in San Francisco. With another hat, I’m a game composer and sound designer. Wearing another, I’m a technology and business consultant for game companies — helping them design their audio systems, looking at workflow, explaining the business of music to them. Finally, I recently started developing “videogames” where the main gameplay elements are driven by sound, not by visuals through a company I founded called Eargames.

What made you decide to create GameSoundCon?

As I’d watched the industry change over the years, I started seeing a lot of composers and sound designers from “traditional media” (film, TV, jingles, etc.) start to dabble their toes in games. And I’d almost always see them trip over the same issues: technical issues, how to deal with the non-linear nature of games, the process of working on a game team and trying to navigate the various business issues. Games have a lot of difficult issues that don’t exist in more traditional media; the Film and TV composers were often stunned by some of the issues game sound people have to deal with. There seemed to be a need to get this game-specific information out to a crowd of extremely talented and experienced linear media composers and sound designers—so that when they did start doing games, they wouldn’t trip over those differences.

During my 10 years on the Xbox design team at Microsoft, I gave a lot of talks and presentations on Xbox and game audio in general. I’d also taught digital audio at Northwestern University in Chicago—I’ve always very much enjoyed teaching. So I figured I’d leverage my years in the industry and love of teaching and start up GameSoundCon in 2009.

Speaking of the industry changing — how has it changed over the 25 years you’ve been doing game audio?

How hasn’t it changed would be an easier question! Back when I got started in 1987, game audio was very technical — you couldn’t just go into the studio, record music and stick it into a game. You had to write for specific little synthesizer chips and deal quite severe memory restrictions (one game’s entire soundtrack had to fit into 32 kilobytes of memory — that’s about one hundred-thousandth of what a typical Xbox game might use for audio today). You also had things like polyphony restrictions—all those things that made games sound “gamey.” On some early systems, you even head to be able to read numbers in hexadecimal format (base 16 math).

As the technology improved, first to CD and then to DVD, the audio gloves came off. At that point for music, you could now record whatever you wanted and incorporate it into the game. While there were (and continue to be) many technical restrictions that have to be dealt with, by and large game music production values now matched that of any other medium. That also opened up the doors of game audio to composers and sound designers who were well versed in more traditional media—film, TV, jingles, songwriting, etc. At the time, a few of us in the industry said “well — looks like games have hit ‘keyboard magazine’”.

There have been a lot of other changes as well. When I was doing John Madden Football as a freelancer in the 90’s, I could do all the sound, music and dialog for the entire game myself. Now, AAA console games require audio teams of a dozen—maybe even more. I remember working on an early Playstation 1 game that had 3,000 lines of dialog — that seemed like an enormous amount of dialog to me. Nowadays, a game might have 80,000 lines and no one thinks anything of it. Technologically speaking, the past few years have been especially amazing. We’re seeing things like AI-based mixing systems, professional DSP effects, hundreds of channels of audio being smartly processed. It’s stunning what tools can be brought to bear on game audio today compared with just a few years ago.

I’ve got a very deep technical background (I have a computer science degree as well as a music degree) and have been in the industry a long time. When I’m working on a game, knowing the tech so well lets me both try things out in the game as well as push the programmers to try things. I can whip up a prototype of what I want to do in code and show it to them (or in some cases, give them the code directly). I find that being able to talk the language of a programmer, to a programmer, gives me some street cred in their eyes. Also, having been in the industry so long, I’m very familiar with how games are made and what it’s like to work to deliver a software product (which is what video games are, first and foremost)

Do you still compose for games, or is GameSoundCon your full-time job now.

I still do music and sound design and I also do a lot of game audio technology consulting and design work. I focus mainly on coin operated games or social games (I’m just finishing up a game for Zynga). One of the things I love about those types of games is the huge variety of styles of music you’re asked to write. It might be country – western one day, Epic “Big orchestra” horns the next, and Spooky haunted music the day after that. I also like the “one audio person does everything” approach used for many of these games. It reminds me of console games from the 90’s (but with studio-quality music). And they can still surprise you — I found myself doing a casual social game with 4,000 lines of dialog; and another with 50 minutes of original score.

What are some of the things you’re most proud of?

In 2008, I was the recipient of the Game Audio Network Guild Lifetime achievement award, as one of the earliest game audio freelancers and my game audio technology work, mainly at Microsoft where I architected much of the audio systems for Xbox and Xbox 360. Being recognized by game audio peers was very humbling. I also had one of my video game compositions, the theme from NARC, recorded and released on CD by The Pixies. That was pretty cool. I also love to see it when I run into people who have attended GameSoundCon at someplace like GDC or write to tell me that they’re working in the industry!

I learned a very embarrassing lesson very early on, when I was an assistant to a Jingle write in Chicago in the early 80’s. I’d been working with him on syncing his music to the commercial’s visuals and had done a number of 30/60 second spots with him. I’d written a computer program to do all the math and spit out the proper click track to make it easy for him to match musical cues to visual hit points. One day we were working on a 10 minute McDonalds industrial film and I used my program to calculate all the sync points. We get to the studio, record the 20 piece orchestra and discover that the end of the film was a full second out of sync with the music. I hadn’t accounted for “Drop vs non-Drop” SMPTE timecode. My lack of knowledge of the technical requirements of the medium (video with SMPTE) resulted in a major screwup that took several hours of (very expensive) studio time to correct.

So my “lesson learned” would be that each medium has its own technology and “gotchas”—and games have a ton of them; technical, creative, even business challenges unique to the industry. The better you know and understand them, the better the end result can be (and you’ll be less likely you’ll have a giant screw up like I did!)

Your music and compositional skills may get you your first gig, but how professional you are: how good you are to work with will get you your second (and third, and fourth….) one and make or break your career. Be professional. Deliver on time and on budget. Be exceptionally responsive to emails, etc. Even if it’s only “hey, I’m away from the office right now so I can’t check that, but will as soon as I get back.” Provide status reports. Your producer is juggling 150 balls in the air: programming, art, schedules… To the extent that you can make them not even have to think about audio—because it’s going so smoothly — you’re doing your job well and will get called back. It’s a small industry and word travels fast about talented people who are good (or bad) to work with. ~ Brian Schmidt

In this interview, we talk to composer Brandon Roberts about his work on Unbroken: Path to Redemption - An unbelievable true story of Olympian and World War II hero Louis Zamperini. END_OF_DOCUMENT_TOKEN_TO_BE_REPLACED

In this interview, we talk to composer Kurt Oldman about his work on a SuperMansion series and also touch on his past work. END_OF_DOCUMENT_TOKEN_TO_BE_REPLACED

In this interview, we talk to Gaayatri Kaundinya about her work as a composer and singer on The Hundred Foot Journey, Jungle Book and Million Dollar Arm. END_OF_DOCUMENT_TOKEN_TO_BE_REPLACED