Sample Logic’s trademark is to take the real and make it surreal. Well, they’ve done it again with Bohemian, taking some traditional “street and world” instruments and making them into a decent sized “cinematic” library which includes the original instruments as well as a couple of hundred modified patches and finally the “multi” patches. As such I will look at the sets individually and also have a closer look at the GUI which, as always with Sample Logic, is pretty fantastic.

For me, any library I consider has to have met certain expectations of quality in recording and with Sample Logic there’s no question – the traditional instruments are captured clearly and beautifully. When messing around with the didgeridoo “kit 1” patch I felt like I was there, next to Laura Inserra as she played it. The same with the others, for example I’ve always wanted a good hang drum because of their wonderful, rich, mesmerising tones and here we are with a very complete set of 8 patches to cover just this one instrument. It sounds amazing by the way.

Not all instruments were recorded in such a way – most of the traditional instruments have 1-3 patches but what you need is there for each of them. For example the Mixer Bells instrument comes with 4 patches: Accent, Hard 1, Hard 2 and Soft with each offering a different play style and catering to a different need a composer might face (or mix and match for variety).

As usual, what you expect from Sample Logic, they’ve thrown all the samples into a cauldron, mixed in secret ingredients while boiling it over a fire and out came their “synth” and other special patches. What we have here is a pretty impressive range of sounds that are either unusual, normal but made in an unexpected way (for example a soundscape/pad made with a percussive instrument) and many other magical possibilities. Really it’s up to the composer here to find what suits their song/project because to try to describe all the different patches in this review would take more words than you’d care to read!

Furthermore, you then have to check out the awesome multis available. These usually speak for themselves, hit a key and you’re transported to another world. Fantastic rhythms, mind bending tones and of course, they take the library that little bit further by not only helping you discover what’s on offer quickly, they put you on track for discovering your own mix and matches.

If there’s one thing Sample Logic always gets dead on, it’s the GUI. A while ago they developed their own style of GUI and have since been using it for all their Kontakt instruments and they have good reason to.

It’s easy to understand and to use, it presents you with a lot of information in a digestible way and gives you access to the true power of the Kontakt sample player through clever use of buttons, sliders, knobs and by using the space effectively within the player. Here, take a look at it for yourself, it’s a thing of beauty.

The same applies for their famous “mutli” patches, the GUI makes it simple by only presenting what SampleLogic feels are the necessary effects you’d need to change how the multi behaves. You can of course dive deeper into each individual patch, but it’s a thoughtful addition to have that up on the top. It just says a lot about the polish that goes into these virtual libraries.

Having now said a lot of positive things, I hate to say it but I feel there is something missing from Bohemian. I’ve used other world instrument plugins before and one thing you really need for them to be more useful is a diversity of instruments which is somewhat lacking with Bohemian. Yes, the library has tons of unusual “synth” or production-style patches many of which sound great but I would say that it would really benefit from a much larger “traditional” instruments section, i.e. to be a bit more robust in the authentic instrument section of the library. Currently limited to only nine instruments, it was somewhat disappointing. My mouth was watering at the chance to get my hands on some authentic world instruments and, as good as they are, there aren’t quite enough to satisfy me.

Priced at $299 or your regional equivalent, this is not a library you should take lightly. I don’t feel this is an “essential” virtual library either, but if you’re looking for something unusual (and have the spare cash) then I would suggest you give it a try. Also if you’re like me and you’ve always wanted a really good sounding hang drum, it’s almost worth it for that one instrument. 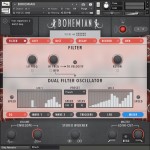 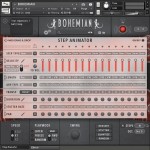 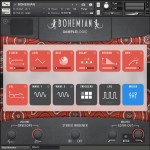 Read our interview with Sample Logic. Don`t forget to rate the product yourself if you bought it in the “Reader rating” tab below!
Click here for more news regarding Sample Logic.
Bohemian review