Ever since trendsetting film composer Hans Zimmer brought the sound of a pipe organ to the movies with his soundtrack for award-winning blockbuster Interstellar, more and more cinematic tracks seem to feature this behemoth of an instrument to convey the feeling of divinity, transcendence and sheer primal power. Since only a few of us have access to a full-blown church organ, several sample instrument developers made it their business to provide composers with the opportunity to have a virtual pipe organ at their disposal. One of these is the latest virtual instrument by Best Service called Organum Venezia.

Organum Venezia is based on a real church organ located near Venice, Italy, which was built by Andrea Zeni in 1999 after the model of world-famous church organs from the Romantic period.

Selected for its graceful and lush sound, the organ was meticulously sampled with a great deal of attention to not only capture the instrument itself, but also the room sound and tonal color of the surrounding church interior.

Best Service states that their object was to realistically catch and reproduce the original room tone, the “breathing” of the organ pipes and the feeling of air vibrating through the church. In order to achieve this goal, they teamed up with V3Sound and recorded the Venetian pipe organ using an elaborate microphone technique.

Today we’ll take a look inside this fascinating instrument and find out, if it sounds and feels as authentic as it promises and how much the highly considered room sound adds to the sonic experience.

Organum Venezia comes as a downloadable product and weighs just a little over 200MB. So you can safely consider this library as a lightweight within today’s sampling world. The first question that came to my mind was: “How can one of the biggest instruments on earth fit into this little space?“. Well, I’ll try to answer that shortly.

Onwards to the installation process. Organum Venezia is played through Best Service’s very own VST sampler called ENGINE. You can download it for free from their website. Once it’s set up in your DAW, you can install and activate your library with a simple “challenge/response” process via the “Preferences -> Libraries” tab. You’ll need to be online and have a Best Service account to complete the process. Once the new instrument is activated (you can verify this by taking another look into the “Libraries” tab), you’re ready to go. Just open up a new instrument layer within ENGINE and select the library from the drop down menu.

A first look at the interface reveals that the developers tried to keep the operation as simple as possible. The main element of the GUI is 18 stops (or “registers”) which, when activated, produce a certain timbre or a combination of timbres. In real life, these stops allow the air stream produced by the organ to reach certain pipes or combinations of pipes to produce the sound.

Below the stops, you’ll find just two more controls labeled “Reverb” and “Volume” which should be pretty self-explanatory. And that’s it for the GUI! 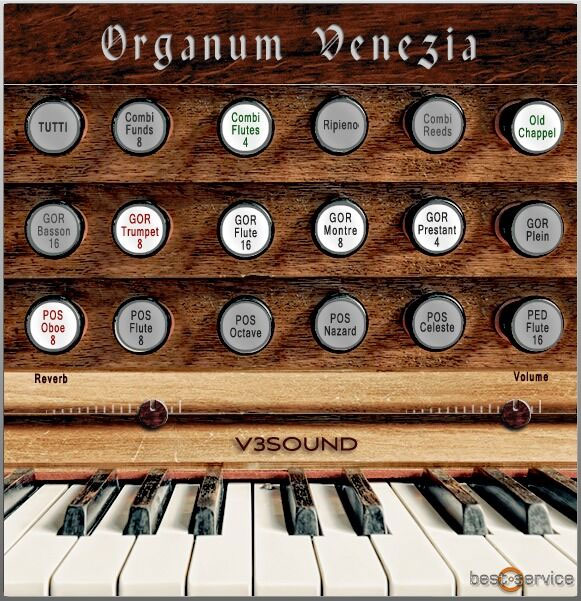 Let’s get back to the stops for a second and see what we can do with these. The first row of stops represents the Tutti and Combi timbres. I’ll explain these in a minute. The next two rows represent all the organ’s single timbres. You can either select a certain timbre and play it solo or activate a random combination of single timbres to get a more complex tone. The “Combi” stops represent a pre-selected combination of timbres found on the original organ. They can be added to single stops. Activating the “Tutti” stop, however, overwrites your current selection of stops and plays all of the timbres or pipes together for an epic, massive sound. A nice feature: as soon as you deactivate the Tutti stop, the library recalls your recent selection of stops.
Here’s an overview of all the timbres you’re given:

A real downer is that there are no keyswitches to change timbres while you play. You have to select and deselect everything by clicking on the interface. Since the dramaturgy of an organ performance is built around adding and dropping timbres, this is quite a big fail on the side of Best Service.

However, as a workaround you could assign MIDI controls to certain stops by right-clicking on them in ENGINE and selecting a free control number. Then you can automate the stops in your DAW quiet easily. That’s a bit inconvenient but still better than nothing.

There’s also a (sort of hidden) option to save your custom timbre selection as a preset. In order to do so, you’d right-click on your instrument layer and select “save as”. This way, you can recall combinations you made and liked at a later time.

Although there’s not much to tweak on the library’s interface itself, you can switch to ENGINE’s “Pro Edit” tab if you want to want to fiddle around with the sound. Here, you’ll find a whole range of dynamic processors, FX, filters and envelope shaping options to customize your patch. 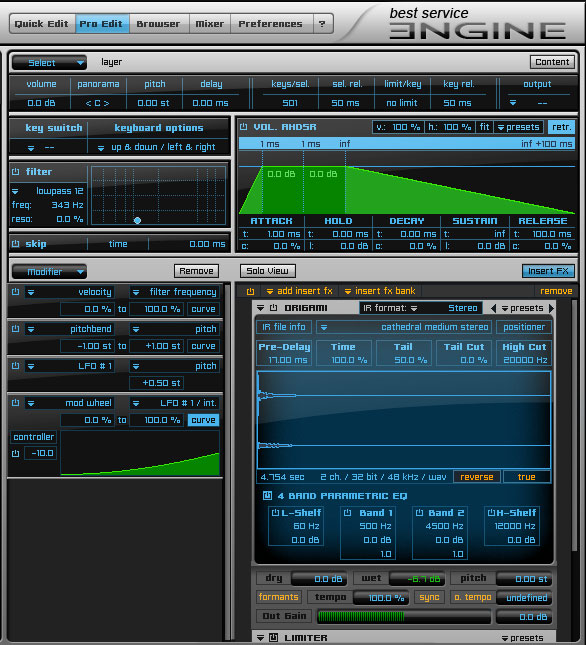 I’ve got to be honest with you here: I never sat in front of a church organ playing away like a slightly less octopus-like version of Davy Jones, so I guess I’m kind of missing the real-life comparison. What I DID experience a couple of times though is how a good organist sounds playing in a church or concert hall. With that out of the way, I can say that Organum Venezia feels and sounds like I’d imagine the real thing would do. The library is very accurately and flawlessly sampled. With 18 different timbres and endless combination possibilities, you’re provided with a huge palette of sonic colors. Especially with the Tutti timbre and some of the Combi patches you get a mixture of raspy, woody lows, present mids and radiant, vibrant highs.

Throughout the timbres, you can hear a pleasant, airy “breathing” sound coming from the pipes. This is particularly audible in the lower ranges. The “breath” adds a very organic and smooth tone to the overall sound.

Speaking of the overall sound: All of the timbres and combinations sound very consistent and balanced over the whole key range. You can definitely hear that each note or rather pipe is sampled individually, so there’s no pitching and stretching of samples as far as I could recognize.

There’s no velocity sensitivity (different samples for different playing velocities) and also no round robins, but that kind of fits into the concept of a church organ. This is one of the reasons, the overall size of the library could be kept so small, I guess. Since the sample lengths and loop points are chosen very well, you can hold down notes forever with no striking audible repetitions.

One thing I’m very excited about and at the same time confused with is the reverb or room tone of this library. It just sounds gorgeously lush and authentic, glues everything together nicely and conveys a really authentic church hall ambience. While playing around with the timbres, I could imagine myself being in a big, historic stone cathedral, the smoke of incense wafting through the aisles.

But wait – didn’t I say I was confused? Yes, and I still am! Because when you dial down the “Reverb” slider on the instrument’s main page, which I thought was just an additional layer of reverb on top of the “real” church hall, all of the samples sound bone-dry. No release samples of the organ ringing out, just plain cut off notes. Didn’t the promo text rave about the magnificent room tone of the Venetian church they were so keen on capturing?

By taking a look into the “Pro Edit” tab again, you can clearly see that the library’s reverb sound is realized via an impulse response of a church. If it is an impulse of the actual church the organ is built in can’t be made out though. To be honest, after reading through the advertising text, I expected the sound of the room to be baked into the samples since it seemed the room was what made this library so special. 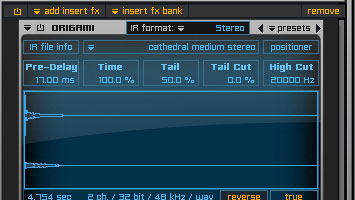 However, in the end, it’s the sound that matters to me and I can only repeat myself: The hall / (pseudo?) room tone sounds absolutely astonishing. Ultimately, that’s what lets me forget the confusion about this reverb issue very easily.

In summary, Organum Venezia is an excellent and authentic sounding organ with 18 freely combinable stops that are very distinguishable and sound great in almost any combination. The overall sound is nicely balanced across all 88 keys.

Apart from a bit of confusion regarding the implementation of the organ’s room tone, I absolutely love the sound of it. This lush reverb sound glues everything together and adds a lot to the majestic quality of the organ.

Besides the great sounding Combi and single stops, my absolute favorite clearly was the sound of the Tutti. It just sounds massive. You seem to feel the thrust of the pipes blowing in the church, you can really hear them breathe. This feeling of air vibrating through the hall had a very overwhelming effect to me and made playing with this library a real pleasure.

In comparison to other church organ libraries I tried, I felt that this particular one was less honky in the mids. Usually this is quite an issue with organs, especially when a lot of notes build up in the middle register.

Of course, there are some technical downsides to this instrument, like the pitiful absence of keyswitches to control the combination of stops while playing. This issue could (and should) easily be fixed with a small update from Best Service in my opinion.

The missing velocity sensitivity and round robins positively reflect the instrument’s size and – to be honest – aren’t really apparent unless you play very fast repetitions of single notes. Another positive thing to mention is the very low CPU footprint of this instrument. It can easily be integrated into existing projects without causing the processor to get to it’s knees.

With a price tag of 89$, this instrument is far more favorable than comparable products of other sample library developers like Toontrack, ProjectSAM or Hauptwerk’s flagship virtual organ. The bottom line is that with Organum Venezia, you’ll get a lovely, versatile and authentic sounding virtual pipe organ for a very reasonable price.