It offers the same 13 instruments as the “full” version and consists of 4 flutes (including piccolo flute), 3 clarinets, 3 oboes and 3 bassoons.
Opposed to the Complete edition’s 17 articulations, the Compact version features only a selection of the five most important articulations for each instrument. These include one sustain articulation and a more expressive, dynamic alternative, as well as three different short articulations which sound like a marcato, a staccato and a very short staccatissimo style of playing to me.

The library consists of meticulously recorded and edited multisamples for each instrument and articulation, as well as “detailed phase-alignment for phase-correct blends and crossfades of dynamic layers“, as the promo text states.

Besides up to eight dynamically playable volume layers, the highlight of this library is its true legato articulations for every instrument as well as a so-called “Note-Heads” feature on which I will go into detail on shortly.

With a focus on the ease of use and versatility, Chris Hein Winds Compact is designed for a broad range of musical applications like classical compositions, film scoring but also pop arrangements.

In the following review, I will share my experiences and thoughts on this feature-rich product with you, so we can see if Chris Hein Winds Compact presents a worthwhile addition to any composer’s arsenal.

Like most of Best Service’s products, this library comes as a download. With 9 GB, Chris Hein Winds Compact is less than half the size of its bigger brother, the “Complete” Edition. Nonetheless, the download is divided into several parts because of the large size of the library.

Chris Hein Winds Compact comes with the latest version of Native Instrument’s Kontakt Player included. Installation takes place via Native Instruments’ Kontakt Service Center, where you have to register the product with the serial code you’re provided with. The library is then added to the Libraries tab of Kontakt, from which you can start loading instruments.

In the topmost section of the interface, you can switch between the monophonic “Legato” mode and the polyphonic “Polyphon” mode. Even in monophonic mode, you can play chords, as long as the keys are hit within a 30ms limit.

Below to the left, you’ll find the “Dynamic” tab, which lets you choose the way, the transition of different dynamic layers is handled. By default, dynamic layers are controlled by velocity – meaning the harder you press your keys, the louder and more intense the sound of a note gets. By choosing the “X-Fade” option, you can use a freely assignable MIDI controller to smoothly blend between different dynamics. By default, this is set to CC #11 (Expression). 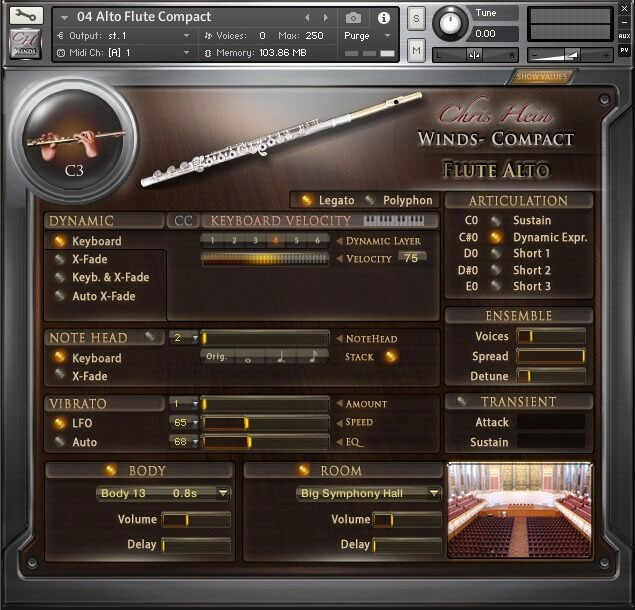 My favorite mode is “Keyboard & X-Fade“, which combines velocity and CC control. Due to a very smart scripting, the two controls don’t get in the way of each other. Instead, the MIDI controller “sees” the dynamic layer set by velocity and adds to that when turned further up. This lets you play quite realistic sounding crescendos and decrescendos. The “Auto X-Fade” adds an automatic volume curve to the notes played. You can either choose between one of five predefined curve presets or draw in your own, custom curve.

The display in the upper mid area provides you with helpful information on which of the six dynamic layers you are currently using as well as the velocity of the notes you’re playing.

“Articulation” shows you, which of the five articulations you are using at the moment. Keyswitches for easy articulation-switching are laid out at the low end of your keyboard between C0 and E0.

Since it’s quite hard to play convincing melody lines just by using one articulation, you’d normally have to either key-switch from long to short articulations on the fly or draw these changes in afterwards via your DAW’s MIDI editor. To make things easier, Chris Hein Winds comes with a very helpful feature called “Note Heads”. By activating it on the interface, sustain and legato articulations are layered with short articulations to provide notes with a more defined attack and release. There are six different note-head variations which you can key through by using a MIDI controller (by default set to CC #2). Beginning with the first and longest variation, the next five note-head samples get shorter and shorter. This way, you can easily adapt attack lengths to the speed of your melody lines.

The next area’s labeling is a bit misleading. “Vibrato” usually describes a slight or intense modulation of pitch over time. The effect you get by activating the “Vibrato” tab though, is a modulation of level – usually referred to as a “tremolo“. Anyway, you’re given two options of how the “vibrato” is produced: by choosing “LFO“, the modulation of volume is produced by an LFO (Low Frequency Oscillator). The amount of modulation can be controlled via Modwheel – CC #1. By selecting the “Auto” option, the modulation follows a pre-set automatic curve that features a slower modulation at the beginning of the note which then speeds up over the time you hold down a key. This mimics the common expression curve of a woodwind player.

The “Transient” tab contains a transient shaper, which emphasizes or de-emphasizes the attack and/or release portion of a note. By dragging left or right in the black fields next to the labels, you can dial in the amount of (de-)emphasis.

Activating the “Ensemble” tab doesn’t add additional voices or instruments as you might expect, but rather enables a standard chorus effect. Applied subtly, it can thicken up the sound of an instrument quite nicely, but dialing in too much results in a very audible, fake sounding effect.

Included with the library are two separate convolution reverb engines – one for the placement of the instrument in a virtual room and one for the body or “corpus” tone of each woodwind instrument. This is quite an unusual and progressive idea to me: While the “Hall” reverb adds a tail and sonic space to the sound, the “Body” engine creates the sound of an instrument being recorded in the near-field. This really adds nicely to the close-mic’ed samples. It does exactly what the name suggests – providing the instrument’s sound with a round and organic body tone that really breathes life into the performance. For both convolution engines, you can choose from a multitude of presets.

Since the library was designed to work both in an orchestral arrangement and a pop music context, developer Chris Hein decided to close-mic every instrument separately, avoiding crosstalk and bleed. This not only allows for a chatter-free signal, it also provides the user with a bone-dry sound he can place in any virtual room or hall he likes to.

Since the interaction with other musicians in the orchestra influences a player’s performance greatly, the recording musicians were given each other’s signal via headphone monitoring so they could still perform together and react to the playing of the others.

Matching the concept of versatility, the instruments weren’t recorded in situ – meaning at their position in a symphonic orchestra. Therefore, each woodwind is panned to the center, leaving you the freedom to place it anywhere in the stereo field.

According to the manual, all of the recorded samples have been aligned in phase, which results in seamless transitions of dynamic layers without any artifacts or volume jumps. Besides smooth dynamic transitions, the authentic transition between notes is taken care of by carefully sampled legato transitions (called “true legato”). These allow for a very natural playability of each woodwind instrument.

When you leave the originally recorded range of an instrument, you get a notification in the upper left corner of the interface, stating “extended range”. Although there’s nothing to find about this in the manual, I’d guess that these “extended” samples derive from lower or higher pitched versions of original samples. Although the extended range samples take away a bit of the authenticity of an instrument, they certainly don’t sound fake or out of place.

On to the most essential part of this review: how does Chris Hein Winds sound?

Well, it just sounds fantastic! As simple as that! Each woodwind instrument featured in the library is expertly sampled, sounds beautifully organic and plays very smoothly. Especially with the superb “Dynamic Expression” articulation, you can literally feel the musician leaning into the performance.

The sound of the short articulations ranges from bold and warm to snappy and punchy. They’re very suitable for creating nuanced woodwind ostinati and rhythmic accompaniments. The rooms and halls provided by the dual convolution reverb add a very lush and “expensive” quality to the instruments, while the “Body” engine rounds off the sound and sets the player back in the room a bit. In combination, this results in a very convincing spatial illusion that can be tailored to your needs from the ground up.

Over the entire playable keyboard range, the instruments sound very balanced and you can hear how the timbre of each instrument is changing smoothly and pleasing from low to high.

With a bit of adjustment regarding the desired room/hall, each of the instruments blend seamlessly into existing projects without much – if any – processing needed.

Again, the sound of each instrument in the Chris Hein Winds Compact Library sounds absolutely beautiful, authentic and distinctive. All the different woodwinds got just the right feel of liveliness and expression to play nuanced, vivid melodies and agile accompaniments.

Chris Hein’s intelligent “Note Head” feature provides a nice layer of clarity and accentuation to your lines. The five articulations included should fulfill most woodwind composing needs and the easy-to-use interface provides you with just the right amount of control over your sound. This contributes nicely to the playability of the library. If you should, however, need some more elaborate control options and articulations like effects and runs, you can crossgrade to the bigger Complete edition at any time.

The library blends really well with other woodwind libraries and leaves much flexibility for spatial positioning via the included dual-layer convolution reverb and it’s awesome sounding IRs.

A feature, that I was missing somehow, was the availability of real ensembles of the different woodwind instrument groups, or at least some scripted patches built from the original samples. Although you can assemble your own ensemble patches with a bit of effort, it would have been a convenient way to quickly lay down broad woodwind lines in a Hollywoodwinds kind of way.

Another thing that could be improved is the rather weak English translation of the manual. It’s not a big deal and you understand what is meant, but letting a native speaker have a look through the text wouldn’t have hurt in my opinion.

All in all, for the reasonable current price of 179 $, Chris Hein Winds Compact is a beautiful sounding and versatile library of orchestral woodwinds and proves to be a valuable asset in every composer’s arsenal of virtual instruments. It definitely found a place in my orchestral template already.

Don`t forget to rate the product yourself if you bought it in the “Reader rating” tab below!
More reviews from Martin Krause
Check out our Sample Library Database for more alternatives
Click here for more news regarding Best Service.
Best Service Chris Hein Winds Compact review