Search
Home
Featured
Altus review (Eduardo Tarilonte and Best Service)
Altus is a great sounding and very high quality library and although it may not be everybody’s cup of tea (due to the nature of the voice) it is worth giving it a try. It is light on the CPU and it has a simple but great graphic interface. You do not even need a full version of Kontakt to run it as it works with Kontakt player as well.
Content
Sound
Graphic interface
Value for money
2014-04-23
4.9Overall Score
Reader Rating: (3 Votes) 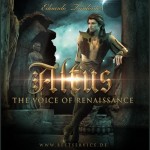 The third instalment in vocal series by Eduardo Tarilonte features a different kind of voice. A countertenor and it is heavenly. Altus comes in a 1.3 GB (lossless compressed) package for Kontakt and Kontakt player. Like with the previous library Cantus, the Altus also features the word builder and Tarilonte`s signature legatos.

Again the library is divided into three parts; Voice, Phrases and Soundscapes all of which sound really nice, but let us have a closer look on how you will be using them.

As I was impressed with Cantus, I was more surprised here when I heard Altus for the first time. I couldn’t wrap my head around its voice. I don’t mean that in a bad way but more of how different it sounds from any other library I heard. Never the less, Altus sounds great and most importantly it sounds authentic. If you ever bought any of the Tarilonte`s libraries you know that this developer will go an extra mile to bring the true authenticity to your doorstep.

Altus features the now well known five true legatos A, E, I, O, U, and a word builder with more than 130 words and syllables. The voice has two articulations (fast and slow) which are triggered via keyboard when you play softly (portamento or slow spead) or loudly (fast).

The voice samples sound as I have mentioned great and if you were ever worried that Altus might suffer from lack of quality I can put your mind to ease. The quality of the sample again is simply stunning and Eduardo surely manages to bring authenticity to your studios.

The phrase patch offers 130 beautiful phrases which can be switched via key switches on your keyboard. Samples are great and the patch doesn`t really take any extra toll on your CPU. Unlike Cantus, Altus is much smaller in size and in my opinion a bit better optimized. More on that in the graphic interface part of this review.

The soundscapes patch is comprised of three voice samples and one pad sample and they really sound great together. I have to say that these soundscapes are one of my favourite of the three vocal sample libraries. In my opinion this is where Altus shines best. The one thing I would love to see is the ability to switch various Altus and pad samples although Soundscapes patches do offer some variety. There are thirteen patches all together and all have some kind of unique “vibe” that makes them a bit different from the rest (voice samples playing the major part here). 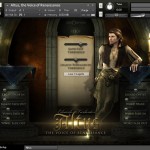 This time I will not spend a lot of time in this section as it is similar to previous Tarilonte`s libraries that I have reviewed. The graphic interface has all the features that you will need to control the sound of Altus. The interface is divided into two parts, one being to control the voice parameters (Altus setup tab) and the other (Altus tab) where you control the phrases or legatos and play with word builder. The “Altus tab” features eight parameters which control the fades of legato and vowels, words x-fades and fade ins and outs. In the middle of the GUI you will find legato and portamento threshold and slow and fast threshold. Both control the way how the voice will behave while playing the notes. At the “Altus tab” you will find the word builder and effects, in this case, the reverb. You can also turn on and off the auto vowel and solo voice which then becomes a polyphonic voice. Although Altus offers polyphony it surely sounds better in monophonic (solo) mode.

The word builder offers the same options as Cantus word builder does but I have to admit that with Altus you can hear the phrases much better which, in my opinion, is due to the nature of the voice itself. This time I will skip the detailed overview/review of the word builder as I have covered it in the Cantus review, though as I have mentioned there is little to no difference between one and the other.

At the first glance Altus is not very different from Cantus but there were some changes made in the backend. You can now assign any word/syllable to any of the legato vowels which will make your compositions sound even more realistic. Altus also seems a bit lighter on the CPU than Cantus (though Cantus is a bigger library) and lower end machines should cope with it just fine.

Like with previous vocal libraries (Shevannai and Cantus), Altus will take some time to master. The graphic interface is easy to understand but the usage of the voice will not be. Overall it shouldn`t take you more than a week to master Altus plus the developer also provided a nice tutorial videos in case you find yourself in a dark.

Altus is priced at 149 EUR for both boxed and the digital versions of the sample library and I personally feel that the price like with Cantus and Shevannai is about right. The quality of Tarilonte`s libraries is just amazing and Altus is no exception.

Not long from now I think Best Service might even have a good deal on all three libraries and if that day comes be sure to be there to grab it as it is worth every penny.

Altus is a great sounding and very high quality library and although it may not be everybody’s cup of tea (due to the nature of the voice) it is worth giving it a try. It is light on the CPU and it has a simple but great graphic interface. You do not even need a full version of Kontakt to run it as it works with Kontakt player as well.