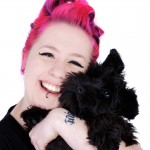 I’m currently studying Creative Music Technology at the University of Surrey, due to finish in June. I write music and often sound design for various games, anything from an iOS game a few years ago to now working with audio in virtual reality!
I also work doing game audio reviews for the Sound Architect website.

Well I have a soft spot for rock/metal having grown up listening to it, as well as some “weirder” styles such as Alva Noto and Steve Reich. I am certainly not classically trained at all so if you want a beautiful orchestral, classical score, I’m definitely not your girl! Not that I don’t love using instruments that belong in an orchestra, I just like raw, emotional music over big “Hollywood” scores.

I recently bit the bullet and got an iMac, which is nice, no more lag from old computers! I use an M-Audio Axiom 49, it just feels particularly nice because the keys are semi-weighted. I also have a little Focusrite Scarlett 2i2 and a Rode NT1-A for recording in guitar or vocals. My most recent upgrade was to Genelec M040’s and even though I have decent reference headphones, it’s so nice to listen to your mix through speakers!

My main DAW is Logic Pro X and when a game needs it I like to use Fmod. I’m also pretty comfortable with Unity 5 although programming is not my strong point by any stretch of the imagination! I love the East West Composers Collection but always like to record something in live. In terms of audio processing I have a few Waves plugins that are great!

Well, this may sound strange but usually when life isn’t going that well, I find myself most inspired. For example I spent some time homeless as a teenager and I think difficult experiences usually produce the most touching music, because you’re not just writing music to pay the bills, it’s about expressing those deep, raw emotions and reaching out to the listeners.

I never start sat at my computer. Once I have an idea of what the game is about and what the music has to get across I like to do everything except write music. I usually gets lots of paper and do a big mind map of lots of words that describe how I feel when looking at concept art or reading descriptions, and then I like to draw up my own sketches of how I imagine what I’m creating the music for (be it characters/environments). Sometimes taking a walk in a similar environment can be great, to just go somewhere and listen really attentively to all the sounds. I always have an app on my phone to record things and if I think of melodies I can hum them into my phone (as long as nobody is around!), then see what I think of them when I get home.

Probably my dog Loki! Not only is he a great cure for cabin fever when you’re working in a room for the whole day and not seeing a single person, he’s pretty much a walking sound effects library too. In seriousness though, I think creativity comes from a deep place and from the many experiences we have throughout our lives. So perhaps seeing the amazing things in everyday life, you maybe wouldn’t notice otherwise is my secret. I find wonder in little things; I often gaze up at the stars and get lost in how ridiculously far away they all are; yet I can see them with my naked eye. That kind of thing inspires me to be creative because it makes me feel small, but in a good way.

Recently I bought a second hand guitar and had a go at my own prepared/tabletop guitar. Which, for those of you who don’t know, is kind of a guitar you play on a table and stick random stuff on it to create cool sounds. I used coins, paper clips, a fork, my keys, old jewellery and played it with a violin bow. That definitely came out with some interesting sounds, to say the least! And that’s before the effects pedals came out.

I have found although usually indie’s are good about royalty sharing or payment, I have had one company who presumed they owned the rights to my music for less than a dollar. It’s difficult because you want the music you’ve spent time on to be in the game it was meant for, but the departure of the executive producer ended in presumptions being made and eventually I had to leave. So perhaps the advice is to be clear from the start on how your music is used and who owns it. I recently saw Ilmari Hakkola give a talk where he advised more companies to be open about composers keeping rights to their music, because without it we can’t even sell our own tracks or collect royalties if they are ever played on a radio station, for example. Sadly big companies are not usually open to negotiations, but I would say if you can open that discussion in the right way, definitely do.

Can I be cheesy and say never give up on your dreams? If you have a vision, for your game or your music, whatever it may be, don’t compromise on it. If you do, you might end up never meeting the people who truly share the same vision and have the ability to create something beautiful together. The main point I’m getting at here is don’t be afraid to break away from the crowd, be artistic and expressive and all the wonderful things that make us human. Games have an amazing power to unite so many people and that’s why I love them.

In this interview, we talk to composer Brandon Roberts about his work on Unbroken: Path to Redemption - An unbelievable true story of Olympian and World War II hero Louis Zamperini. END_OF_DOCUMENT_TOKEN_TO_BE_REPLACED

In this interview, we talk to composer Kurt Oldman about his work on a SuperMansion series and also touch on his past work. END_OF_DOCUMENT_TOKEN_TO_BE_REPLACED

In this interview, we talk to Gaayatri Kaundinya about her work as a composer and singer on The Hundred Foot Journey, Jungle Book and Million Dollar Arm. END_OF_DOCUMENT_TOKEN_TO_BE_REPLACED